June 5, 1985
The Cubs played the game featured in the movie “Ferris Bueller’s Day Off”. If you’ve seen the movie, you probably remember the three goof offs spending the day at the ballpark. It wasn’t a recreated game–it was an actual Wednesday afternoon game at Wrigley Field.

The Cubs were hosting the Atlanta Braves, and the score was tied in the top of the 11th inning with the Braves batting. Claudell Washington was batting against Lee Smith as Leon Durham held Paul Zuvella on first base. In the movie, the fry cook tells Mr. Rooney, who sees it on television, that the score at that point was 0-0 (though the actual score was 2-2).

The Cubs eventually lost that game in the 11th inning. Washington flied out for the first out of the inning. The batter after Washington was Rafael Ramirez and he hit a two run home run off Lee Smith to win the game.

The Cubs completely collapsed that season after their entire starting rotation spent time on the disabled list. The only other highlight of the the 1985 season was when Pete Rose tied Ty Cobb’s record in Wrigley Field that September.

June 4: In 1983, Fergie Jenkins wins his 280th career game in a 5-2 win over the Pirates…In 1985, the Cubs beat the Pirates again, 5-3. Keith Moreland and Ron Cey both homer. The Cubs haven’t won a game at Wrigley Field on June 4th since…In 2003, Sammy is suspended for using a corked bat in a game against the Tampa Rays.

June 5: In 1942 Phil Cavarretta drives in three runs and the Cubs beat their old teammate Larry French in the bottom of the 10th inning, 4-3…In 1996, Sammy Sosa homers on three consecutive at-bats. The Cubs win the game 9-6.

June 6: It’s so foggy at Wrigley in 1923 that the umpires can’t tell if balls are being caught or not. The Cubs get twelve hits in the mist and beat the Giants 6-1.

June 7: In 1946, Claude Passeau is a one-man show in the first game of a double header against the Dodgers. He pitches a four-hitter, and hits a walk-off homer in the bottom of the ninth to win 2-0. Bob Chipman shut the Dodgers out in the second game too.

June 8: In 1958, Moe Drabowksy pitches a sparkling 1-hitter against the Pirates. In the second inning Ted Kluszewski gets Pittsburgh’s only hit of the game. Ernie Banks and Moose Moryn both homer for the Cubs…In 2012, Roger Waters from Pink Floyd performs on a stage in centerfield.

June 9: In 1963 Ernie Banks hit three homers against Sandy Koufax and Santo adds another, and the Cubs still somehow lose the game 11-8…In 1977, Jose Cardenal wins the game for the Cubs by bunting in the winning run in the bottom of the 11th inning against the Giants. It was the only run of the game…In 1978, Dennis Lamp pitches a one-hitter against Padres. Gene Richards gets the only hit of the game in the 6th inning…And in 2012 Brad Paisley staged a concert at Wrigley.

June 10: In 1942, the Cubs rally to score five runs in the bottom of the eighth to beat the Phillies and win the game for Bill Lee. 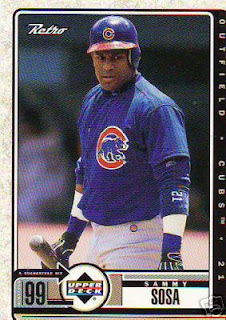 June 8, 2003
The Cubs face off against the New York Yankees in an inter-league game at Wrigley Field.

It was supposed to be a pitcher’s duel, Andy Pettitte vs. Mark Prior, but it turned into a slugfest instead. Jason Giambi, Raul Mondesi, and Robin Ventura (remember him?) all homered for the Yankees in the game, and Alfonso Soriano added a double. He was still a second baseman at the time–and showed why he would eventually be moved to the outfield when he also committed a costly error.

But despite the strong Yankees lineup, the Cubs came out victorious (8-7). They knocked Pettitte out of the game before the second inning was over (one of the shortest starts of his career). Moises Alou and Ramon Martinez both went yard against him.

The game also featured a hitting milestone. In the bottom of the seventh, with the Cubs up 6-3, Sammy Sosa stepped into the box against Yankees pitcher Juan Acevedo. Sosa ripped a single into left field, scoring Alex Gonzalez with the seventh run. It was the 2000th hit of his career, and it came while he was appealing his 8-game suspension for using a corked bat (in another inter-league game against the Tampa Devil Rays only five days earlier).