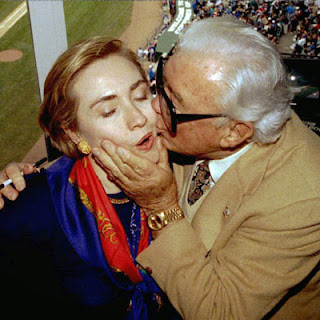 April 4, 1994
First Lady Hillary Clinton appears at Wrigley Field to throw out the first pitch. Hillary later sits in the booth with Harry Caray and sings “Take Me Out To The Ballgame” with him. At one point, Harry grabs her and gives her a big wet kiss with his fleshy, meaty lips. Judging by her facial expression in the photo, it might be the moment she became a Yankees fan. (Chicago Cubs Photo by Stephen Green) (Tribune file)

On the field the legend of Tuffy Rhodes is born as he hits three home runs against the great Dwight Gooden. Doc gets the last laugh, however, because the Mets beat the Cubs 12-8. Rhodes only hits five more homers for the Cubs the rest of the year.

~April 1: It’s opening day 2011 and the Pirates are in town for Mike Quade’s first opening day as manager. It doesn’t go as planned. Neil Walker drives in four, and Andrew McCutcheon drives in two more as the Pirates beat Ryan Dempster and the Cubs 6-3.

~April 2: The Cubs open the 2001 season at Wrigley Field against the Montreal Expos, and lose it in the 10th inning on a Vladimir Guerrero RBI single. Todd Van Poppel gives up the winning hit.

~April 3: Steve Trachsel takes the mound for the 1998 home opener against the Expos and comes up big. Not only does he get the win, he drives in the winning run. Cubs win 6-2. It’s the first game since Harry Caray’s death, and Dutchie becomes the first guest conductor of the 7th inning stretch.

~April 4: In 1989, Wild Thing debuts for Cubs. He allows three runners to reach before striking out the side for the save…In 2003, Sammy Sosa hits his 500th home run as a Cub… In 2008, expectations are high for the 100 year anniversary of the Cubs last World Series championship. The Astros are at Wrigley, and score two unearned runs in the eighth inning to take a 3 run lead. Mark DeRosa homers in the ninth to bring the Cubs within one run, but they fall short. Jon Lieber takes the loss.

~April 5: In 1979, winds are swirling at 45 mph as Cubs opening day starter Rick Reuschel takes the mound. Reuschel gives up six runs to the visiting Mets, but Dave Kingman also crushes a three run bomb. At the end of the day, however, it’s the Mets on top, with a score of 10-6. In 2015, the Cubs celebrate first Opening Night in team history with Wrigley Field under construction. Some of the bathrooms malfunction, and fans are forced to wait in ridiculously long lines. Cubs lose 3-0 to Cardinals.

~April 6: On opening day in 1971, Fergie Jenkins and Bob Gibson face off in one of their classic pitching duels. At the end of nine innings the score is tied 0-0. Fergie goes back out for the tenth and shuts out the Cardinals again. Gibson follows him out to the mound in the bottom of the 10th, but this time he has to face his nemesis Billy Williams. Sweet Swinging Billy hits the ball out of the park for a 1-0 walk off win…In 1993, Jose Guzman loses his no-hitter with two out in the ninth inning, and beats the Astros 1-0.

~April 7: With Tom Seaver on the mound for the Reds, the Cubs are bound for a difficult day at the plate, and that’s exactly what happens on this day in 1977. Steve Ontiveros touches him for a homer in his first game as a Cub, but the Reds are too much for Chicago on this day. Final score: Reds 5, Cubs 3…In 1987, Andre Dawson plays his first game as a Cub…In 1988, the Cubs start installing lights…In 1994, Michael Jordan plays in an exhibition game at Wrigley Field as a member of the Sox. (PHOTO) He gets two hits. 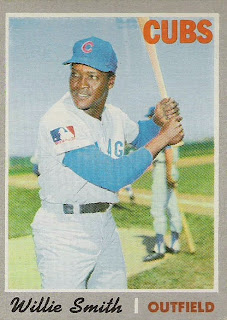 April 8, 1969:
It looks like it might be a long year for the Cubs. In the top of the 9th inning on Opening Day, Fergie Jenkins gives up a three run homer to Don Money of the Phillies, allowing the Phillies to tie the game at 5. Then in the top of the 11th, Don Money strikes again–this time off Phil Regan–knocking in the lead run. The Cubs have one more chance in the bottom of the 11th. Ernie Banks flies out to right field, but Randy Hundley follows with a single, which brings up Jim Hickman. In an unusual move, Leo Durocher calls Hickman back to the dugout and sends up a pinch hitter.

Outfielder Willie Smith steps in versus Phillies pitcher Barry Lersch. It is Lersch’s first game in the big leagues, and Smith is a grizzled veteran. When Smith takes a swing at Lersh’s offering, there is very little doubt that the ball is gone. Smith is mobbed at home plate by his teammates, and Chicago officially has officially begun their year-long love affair with the Cubs.