*Big news across the country: Shirley Temple, who had her first movie kiss only a few months ago, will be married Wednesday night to Sgt. John George Agar. Flowers Cost $2,500 for ‘No Circus’ Ceremony. 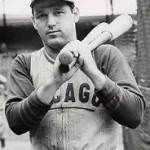 *Bill Nicholson sets a NL record for most putouts by a right fielder in a nine inning game with 10—Cubs lose the game 4-0 to the Dodgers. 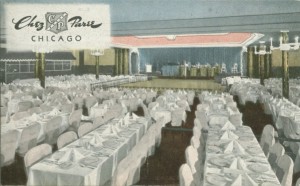 *Big news at the Chez Paree: Danny Thomas is signed for the Club’s Oct. 2 Opening Night.

*The Tribune reports: DELAY EXPECTED IN COMPLETING U. S. 66 PAVING – Final Bids Received Only Two Weeks Ago: Completion of the new 24 foot pavement on U. S. 66, the major highway building job attempted in Illinois during the war, probably will be delayed until next year, road building officials said yesterday.

*1000 whites walk out of nearby Gary, Indiana schools to protest integration.

*“Lady on a Train” starring Deanna Durbin and (Chicagoan) Ralph Bellamy is released.

*Peter Falk turns 18. He is serving in the merchant marines as a cook.

Cub of the week: PAUL GILLESPIE
He is a big strong boy, just off a two year stint in the Coast Guard, and back with the Cubs as their only left-handed hitting catcher. At 6’3″, 195 pounds, he’s an imposing figure in the batter’s box. Gillespie will hit .288 and knock in 25 runs in 75 games, and will even get a shot at playing in the World Series (he goes 0 for 6), but he’ll never play in the big leagues again after this memorable pennant winning season.