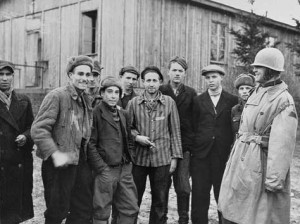 *American troops liberate their first Nazi concentration camp, Ohrdruf death camp in Germany. They are shocked by the conditions there.

*Alger Hiss is congratulated in Moscow for his part in bringing about the Western betrayal at the Yalta Conference. 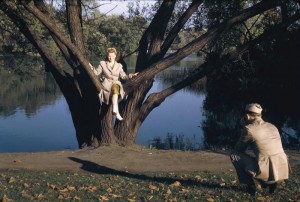 ~Spring is in the air. The weather is warmer than usual for this time of year, and Chicagoans are enjoying it outdoors. Here a young lady poses for her boyfriend by Jackson Park Lagoon. As anyone who lives in Chicago knows, the weather can change at the drop of a hat. By the time the Cubs come back to Chicago, it will be freezing cold. 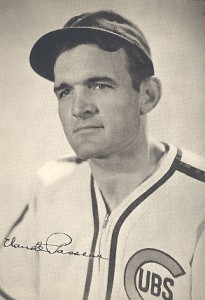 *The Cubs are getting frustrated at their spring training in French Lick, Indiana. It’s been a rough spring training. They’ve had little competition, bad turnout, and the conditions of the fields are atrocious (flooding is a big problem). To make matters worse, Phil Cavaretta (their star player) has to return to Chicago (actually Evanston) because his wife is sick, and scheduled opening day starter Claude Passeau (photo) is sent back to Chicago to have his ailing elbow examined. He has never had arm troubles in 14 big league seasons, so the Cubs are naturally worried.

*Other teams are struggling too. White Sox star Luke Appling turns 38 this week, but he can’t play for the Sox. He is serving in the military. Promising Dodgers youngster Gil Hodges turns 21 this week, and his military service will also preclude his playing for the big league team this year.

*“The biggest hit of 1945 is “Sentimental Journey” 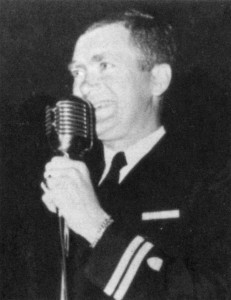 ~Three future celebrities are born this week: Gabe Kaplan in Brooklyn, Walt Frazier in Atlanta, and Eric Clapton in Ripley, Surrey, England. Clapton’s mother is only 16. His father is a Canadian soldier.

~Three singers celebrate birthdays this week too, although only one of them is well known. Doris Day is the biggest singing star in America, and she turns 23. Meanwhile, in Virginia Wayne Newton turns 3, and little Michael Anthony Orlando Cassavitis has his very first birthday party in New York. He will later become known as Tony Orlando.

Hy Vandenberg is one of the last two Cubs to report to Spring Training. This week in 1945, he’s not even there yet. Vandenberg had been a fringe big league pitcher in the years before the war, pitching mainly in September for teams out of the pennant chase. He got a cup of coffee in 1935 with the Boston Red Sox (and was pounded), and then 1937-1940 with the Giants (and was pounded in each season).

With the wartime Cubs of 1944, however, Vandenberg won seven games and pitched quite well in relief. The Cubs consider him a key part of their bullpen, but he is holding out for more money as the season begins. He tells the Daily News that he is perfectly happy playing park district baseball in his hometown of Minneapolis. He will finally come to terms just before the first roadtrip.

It’s a good thing. Vandenberg has another good season in the bullpen, and later pitches brilliantly in relief during the World Series (3 appearances, 6 innings, only one hit allowed). After that, he’ll never pitch in the big leagues again.