*The Battle of Iwo Jima officially ends, but small pockets of guerrilla resistance are persisting past the official conclusion of the battle.

*Adolf Hitler, from his underground bunker, orders that all industries, military installations, machine shops, transportation facilities and communications facilities in Germany be destroyed. 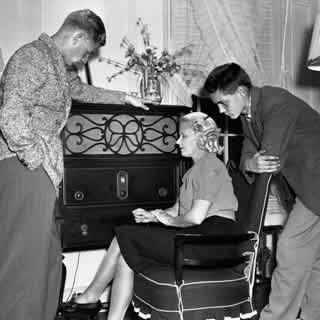 *For the first time ever, the Academy Awards are broadcast live on the radio on the ABC Radio network, providing Chicagoans with a well-deserved diversion from every day life. Bob Hope and John Cromwell host the event from Grauman’s Chinese Theater, in Hollywood, California. The 17th Academy Awards have a few new wrinkles. This is the first year that the Best Picture category is limited to 5 nominees. This is also the first and last time an individual is nominated for Best Actor and Best Supporting Actor for playing the same role in the same film. Barry Fitzgerald is nominated in both categories for the character of Father Fitzgibbon in Going My Way. (He wins for Best Supporting Actor.)

*The temperature reaches 78 degrees in Chicago on March 16th, 1945, setting a record that still stands.

*Bert Shepard, a one-legged WW II vet (photo), tries out as a pitcher for the Washington Senators. He will pitch one game.

*Cubs pitcher Vern Olsen celebrates his 27th birthday in the service. He won’t be back to the Cubs during the 1945 season, but he’s keeping sharp by playing on the 14th Naval district all-stars in Hawaii. Among his teammates are Pee Wee Reese and Johnny Mize. He’ll return for the 1946 season, but it will be his last in the big leagues.

*Olsen is probably getting better competition than the Cubs themselves. Because of the travel restrictions placed on baseball, the only team close enough to play the Cubs in spring training exhibition games is the Cincinnati Reds. The Cubs will face the Reds many times during spring training. In the regular season they’ll beat the Reds 21 out of 22 games.

*“Sherlock Holmes and the House of Fear” is released starring Basil Rathbone.

*Carl Reiner celebrates his 23rd birthday. He is currently in the US Army entertaining the troops as a GI Comic in the South Pacific.

*A baby named Patrick Riley is born in Rome, New York. His parents immediately slick back his hair. 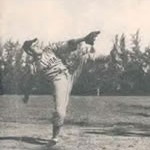 The one-time ace of the Cubs staff, Hi Bithorn, won’t be available to pitch in 1945 because he is serving in the military. Along with catcher Chico Hernandez, Bithorn was part of the very first all-Latin battery in Cubs history. Bithorn is from Puerto Rico, the first Puerto Rican to ever play Major League baseball. Known for his high leg kick, he had one great season with the Cubs in 1943, winning 18 games with seven shutouts, and an ERA of 2.60. The Cubs don’t know it yet, but their former ace is putting on the pounds in the military. When he reports for spring training in 1946, he’ll weigh 45 pounds more than he weighed when he left.

He’ll try to pitch for the Cubs in 1946, but he won’t have anything left. Bithorn’s life will take a tragic turn when he tries to make a comeback in the Mexican League. On New Years Day in 1952, he is shot to death by a policeman in Mexico, in what is still considered a mysterious case. Bithorn is a hero in his native Puerto Rico to this day. The name of the baseball stadium in San Juan is Hiram Bithorn Stadium. The Montreal Expos played some of their home games there in 2003.