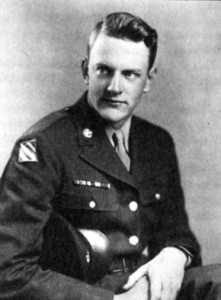 *Future movie and television star James Arness (photo) is discharged from the Army after receiving several battle awards and medals. He is wounded, but recovering.

*Swedish ships bring food to the millions of people starving in the Netherlands.

*Eddie Slovik is executed by firing squad for desertion, the first American soldier since the American Civil War, and last to date to be executed for this offense.

*Dan Topping, Del Webb and Larry MacPhail purchase New York Yankees for $2.8 million. MacPhail will run the club, and will make a trade later this season that will help the Cubs win the pennant. 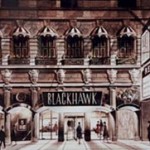 *The Blackhawk Restaurant, at Randolph and Wabash streets, is one of THE hot spots in town. Huge stars like Benny Goodman and Louis Prima are among the many famous musicians who perform there, and are featured on nightly WGN radio broadcasts.

*Price check: A portable electric heater is $42.50, and for those lucky few, the Ford Super Deluxe Sedan Coupe is $1395.

*“Rum and Coca Cola” by Andrews Sisters hits #1. It will be the second biggest hit of the year.

*Paul Newman is in the Navy on his 20th birthday (Jan 26), serving aboard the USS Bunker Hill during the Battle of Okinawa.

*Future Pink Floyd drummer Nick Mason is born in England on the 27th, and future heartthrob Tom Selleck is born on the 29th in Detroit Michigan.

*Future Dynasty star John Forsythe celebrates his 27th birthday. He is serving in the Army, and working with injured soldiers that have speech problems. 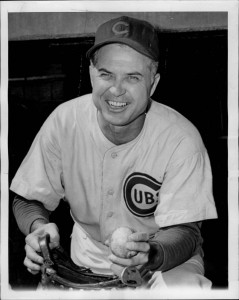 Ray Prim was one of the oldest player on the Cubs (39), and probably wouldn’t have been in the big leagues if the war was over. In fact, he had been out of baseball for nearly ten years before returning to pitch for the Cubs in the 1943 season. His teammates called him Pops.

Primm had badly burned his right hand during his youth. As result, though he was naturally right-handed, he threw with his left-hand. (He batted from the right side of the home plate.) Prim made his major league debut on September 24, 1933 against the Philadelphia Athletics. Prim faced Mickey Cochrane and Jimmie Foxx to start his major league career, and struck out both future Hall of Famers. Unfortunately, the rest of his career didn’t go quite as well. He was in the minor leagues by 1936.

He is currently training with his former minor league team, the Angels, and is gearing up to pitch for the Cubs again in 1945. He will become one of the team’s most reliable pitchers and will pitch in the World Series.