*The final official surrender of Japan is accepted by the Supreme Allied Commander, General Douglas MacArthur, on board the American battleship USS Missouri in Tokyo Bay.

*The Volkswagen makes it’s way out of Germany. It’s described this way in the newspaper: BRITISH ASSERT ‘VOLKSWAGON’ HAS GOOD POINTS: The German peoples’ auto on which hundreds of thousands of Germans gave a down payment and received only Hitler’s promise in return, has been tried out in Britain and has received favorable reports by most of the motoring experts writing in the British newspapers. They say that altho its finish and standard of engineering are far below British light cars, the volkswagon suspension system with … rear engine, road-worthiness, and economy in gasoline could well be incorporated in a British automobile to sell below $400. 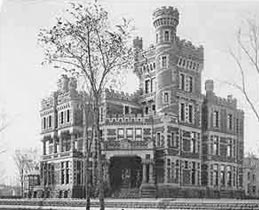 *Big news in the Tribune: PALMER CASTLE SOLD FOR RAZING – Skyscraper Apartments to Be Built on Site: The world famous Potter Palmer mansion (photo), at 1350 Lake Shore dr., built in 1882 at a cost of more than a million dollars and the center of Chicago’s social life for many years, was sold yesterday to a New York syndicate. It will become the site of a tall apartment building. 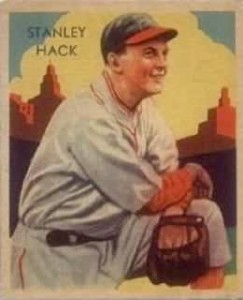 *White Sox star Luke Appling is discharged from the Army.

*The Red Sox aren’t as lucky. Their star slugger Ted Williams celebrates his 27th birthday this week, and is still serving in the Armed Forces.

*Rocky Marciano celebrates his 22nd birthday. He is serving in the Army, stationed in Wales

Cub of the week: EDDIE WAITKUS 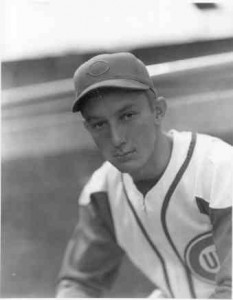 Eddie Waitkus is a young stud first baseman for the Cubs that has been in the service for three years now. Unlike most baseball players in the service, he is seeing actual combat. He just earned the Bronze Star. Eddie will be coming home in a few months as Sgt. Waitkus. Next year will be his official rookie season with the Cubs. He’ll beat out the reigning NL MVP for the first base job and be named the Rookie of the Year. Despite being a war hero and the rookie of the year, Eddie will always be remembered for something else. In 1949 he will be shot by a deranged fan; the inspiration for the book “The Natural.”