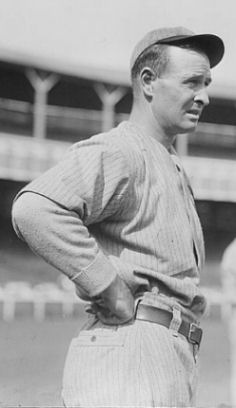 Frank Chance celebrates his 31st birthday (Sept 9) in Chicago with a win against the Cardinals–putting the Cubs 28 games over .500 (but still in third place, three games out of first.) Chance was more than just the first baseman and clean up hitter for the 1908 Cubs–he was the manager and the brains behind the organization. His nickname was “The Peerless Leader” and there was never a question about who was in charge of this team. He was fierce and competitive.

One time after a loss he was brooding at home after a loss and wouldn`t eat or talk. His wife said, “Don`t worry, dear, you still have me,” and he replied “Many a time this afternoon, I`d have traded you for a base hit.” He was known to be a brawler. James J. Corbett, heavyweight champ, called him: “one of the best amateur fighters I`ve ever seen.” One time he provoked a riot by punching out Giants pitcher Joe McGinnity at the Polo Grounds. Another time he threw a bottle into the stands at fans in Brooklyn.

He was just as fierce as a manager and general manager. He once acquired a pitcher (Jack Harper) who beaned him one too many times, just so he could cut his salary (by 2/3), and refuse to pitch him, thereby effectively ending his career.

His superstitions were just as legendary. He always insisted on berth 13 in a train—and if he couldn’t get it, he’d write it on the door. Before every game, he looked for four leaf clovers. He believed that it was fine for players to drink, so much so that he usually bought the drinks for them, but he believed it was unlucky to drink after midnight. He also liked players that bet on horses and played poker—but again, never past midnight. 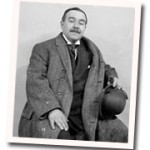 He has been beaned so many times that he is struggling in 1908. Teams are throwing at him more and more, and he is having horrible headaches. In a few years (1912) he will collapse on the field and have to undergo emergency brain surgery. Cubs owner Charles Murphy (photo) will take that opportunity to fire Chance, effectively ending the Cubs dynasty. April 12, 1912 is the last game that Tinkers, Evers and Chance played together. Chance will die in 1924 shortly after the White Sox hire him to manage their team. He never takes the field in a White Sox uniform.

In baseball this week

*The Cubs are on a roll. They sweep a five game series in St. Louis, and by the end of the week they are 83-51, an amazing 32 games over .500. However, they are still in third place behind the Giants and the Pirates with time running out.

*Cubs backup outfielder Kid Durbin celebrates his 23rd birthday (Sept 10). He will get a grand total of 28 at bats for the Cubs in ’08, including one extra base hit—a double.

*The Wright Brothers take their military flyer on the world’s first one-hour flight on September 9th.

*O Henry celebrates his 46th birthday September 11th. His real name is William Sydney Porter and he is known for his stories with great plot twists and surprise endings. He is living in New York and drinking heavily–which is beginning to affect his writing. In two years he will be dead.

*DH Lawrence celebrates his 23rd birthday on September 11th. He has just received his teaching certificate from University College Nottingham. He is about to move to London. His most famous novel “Lady Chatterly” will not be published until 1928, two years before his premature death.

If you travel back in time, and you hear a whistling noise coming out of the kitchen, it’s not a tea-kettle. The whistling tea-kettle won’t be invented until 1921.