Tension builds for the big game between Pittsburgh and the Cubs… 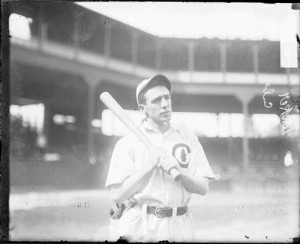 *In Cincinnati, Joe Tinker (photo) hits a home run on September 29th that lodges into the experimental “light tower” in centerfield. Because there isn’t a rule in place about what happens if a ball gets stuck there, the outfielder tries to get it out, while Tinker rounds the bases. (The Reds eventually played the first night game in 1935)

*Ed Reulbach pitches his fourth consecutive shutout, and Cubs win 6-0 on October 1st. The Cubs win again the next day, and after the game, ½ game separates three teams, the Cubs, the Giants and the Pirates. The Pirates are in first, the Cubs and Giants ½ game back.

*On October 3rd, Reulbach pitches again, and the Cubs beat the Reds again 16-2. They are still ½ game back of the Pirates, who they are playing next.

Then comes the big game… 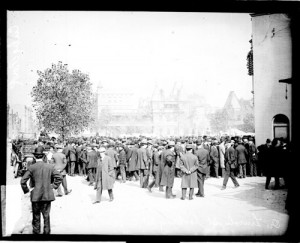 The Pirates come to Chicago (Oct 4) for their biggest game of the season. In front of a record setting crowd of 30,000 at West Side Grounds, there is excitement on the field and off. On the field, the Cubs win the game 3-2, knocking the Pirates out of the race.

Off the field, the crowd swarms the field to celebrate, and a woman gives birth in the stands. In Pittsburgh and New York, the new method of “watching” games (with “electronic” scoreboards) draws huge crowds too, and police are called to restore order. Only the Giants can catch the Cubs now, and they have to win all three of their final games just to tie them. The Cubs have won 41 of their last 51 games (the best in history), and 14 of their last 16. 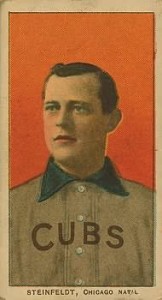 *The forgotten infielder Harry Steinfeldt celebrates his 31st birthday (Sept 29). Steinfeldt is the answer to the trivia question, ‘who was the other infielder besides Tinkers, Evers & Chance.’ He was the third baseman, and important part of the team. Steinfeldt was one of the first players that Chance acquired when he took over. He traded Jake Weimer, a left handed pitcher, to Cincinnati for him. Steinfeldt was probably the MVP of the 1906 team that set a record for most victories.

*In the American League the race is just as exciting. Detroit, Cleveland, and the White Sox are only a game apart heading into the final week of the season.

*Enrico Fermi (future father of the A-bomb) turns 7 (Sept 29) in Rome. He is already a science buff.

*Mahatma Gandi turns 39 years old (Oct 2). He is living in South Africa, perfecting his concept of civil disobedience. He will soon bring this concept to his native India, and lead a movement that will eventually bring Indian independence. His birthday is now a national holiday in India.

*Four great comedy stars celebrate birthdays this week, although none of them are known yet.Groucho Marx is 18 on October 2nd, Bud Abbott is 13 on October 2nd, Buster Keaton is 13 on October 4th, and Larry Fine is 6 on October 5th. Groucho lives on the Upper East Side of Manhattan and is still known as Julius. He sings in a group with his brothers Milton (Gummo) and Adolph (Harpo). Abbott just dropped out of school to work as a carny at Coney Island. His parents are circus performers. Keaton is already working in Vaudeville with his father–getting big laughs with his physical comedy (his father throws him around the stage). And Larry is still known as Arthur Feinberg in Philadelphia. He has just taken up the violin to strengthen his arm after an acid accident.

*Damon Runyon, who will go on to pen “Guys and Dolls,” is 24 (Oct 4). He still lives in Colorado and is trying to organize a minor league baseball team. After it fails, he’ll move to New York.

*Ray Kroc turns 6 (Oct 5). He lives with his Czech immigrant parents in Chicago, the same town that will give birth to the franchise which eventually makes him a multi-millionaire…McDonalds. 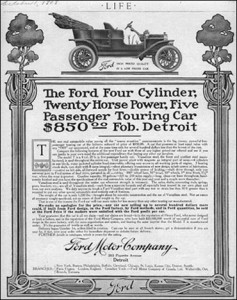 If you travel back in time, and one of your Velcro strips are damaged—you won’t be able to replace them. Velcro won’t be invented until 1948.