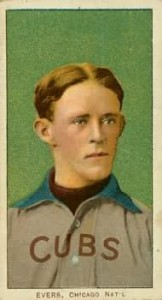 The Pirates and Cubs are tied 0-0 in the last of the 10th at Pittsburgh on September 4th. With two outs and the bases loaded, Pittsburgh’s Owen Wilson singles to CF, scoring Fred Clarke with the winning run. Warren Gill, on 1B, does not get to 2B but stops short, turns, and heads for the dugout, a common practice.

The Cubs’ Johnny Evers calls for the ball from centerfielder Jimmy Slagle, touches 2B, and claims the run does not count because Gill was a force out victim. The lone umpire, Hank O’Day, has left the field. When the Cubs protest, O’Day rules that Clarke had already scored, so the run counts. The Cubs also protest to league president Harry Pulliam, but are denied. This is the first time the Cubs try this tactic, but not the last.

Because the Cubs were technically correct in assessing the rules, this moment sticks in the minds of both umpire Hank O’Day and league president Pulliam. It will prove to be the decisive moment in the Cubs pennant drive a few weeks from now.

*The Cubs beat the Cardinals three out of four in Chicago, then split a home and away series with Pittsburgh. They are 77-51, and in third place behind the Giants and the Pirates (three games out of first).

*Labor Day 1908 is September 7th. The Cubs play a double header against Cincinnati at West Side Grounds (they win one, and lose one), while the Labor Day Parade (photo) takes place a few miles away. 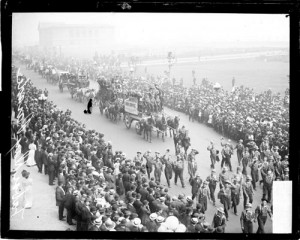 *Jane Addams turns 48 years old in Chicago (Sept 6). She is well known in Chicago as the co-founder of Hull House, which has been open since 1889, one of the first settlement houses in America. Hull House has a night school for adults, kindergarten classes, clubs for older children, a public kitchen, an art gallery, a coffeehouse, a gymnasium, a girls club, a swimming pool, a book bindery, a music school, a drama group, a library, and labor-related divisions. She will become the first American woman to be awarded the Nobel Peace Prize. A part of I-90 near O’Hare Airport is now named after her.

*Future NFL Hall of Famer Paul Brown is born (Sept 7) in Norwalk, Ohio. He becomes the part-owner of the Cleveland Browns, but the team is not named after him. It was originally named the Cleveland Brown Bombers (a tribute to Joe Louis), and was shortened to the Browns a few years later.

*Kennedy Patriarch Joseph Kennedy turns 20 (Sept 6). He is a student at Harvard. After graduating he will make his fortune in the stock market–using information that is now known as “insider trading” but which was legal at the time. He will turn his $5 million fortune into $135 million during Prohibition. It is rumored that he is importing liquor from Canada during those years, but that was never proven. What is known is that he has such a huge stockpile of liquor when Prohibition ends, he will make millions selling it. His crowning achievement, however, will be the work he does in 1960 to elect his son John president of the United States.

If you travel back in time, don’t expect to stay at the Drake Hotel. It won’t be built until 1920.