The vast majority of games are umpired by only one man. This leads to what we would consider to be widespread cheating.

Cubs third baseman Harry Steinfeldt is notorious for “accidentally tripping” players approaching third base while the umpire is watching the action elsewhere. Catcher Johnny Kling is another good tripper. He likes to either trip the player as he leaves the batter’s box or “accidentally” steps on his foot. The umpire doesn’t call it if he doesn’t see it.

One game they both pull the trick. This spurs an angry reaction from Giants manager John McGraw. He comes storming onto the field and screams at the umpire, before sarcastically canvassing the crowd to ask if anyone has a hairpin he can lend the ump…a man with an obvious hairpiece.

McGraw is ejected from the game. Kling and Steinfeldt are not.

In Baseball this Week

~Mordecai Three Fingers Brown pitches a 1-hitter to beat the Dodgers in Chicago at the West Side Grounds (May 17). Overall the Cubs go 2-3, but remain in first place with a record of 15-7. 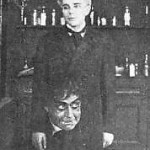 ~The Ottoman Empire Revolution begins. By the end of the summer, the Empire will crumble. (May 13)

~The first passenger flight occurs (May 14) at Kitty Hawk, North Carolina. Wilbur Wright takes Charlie Furnas up for a hop that covers 656 feet. Orville Wright takes him up next, and the flight lasts just over four minutes.

~A young Christian Scientist named Henry Fonda turns 3 years old on May 16. His parents don’t believe in doctors, so they pray he doesn’t get sick. Of course, he’ll grow up to win the Academy Award.

~A little Italian immigrant boy named Francesco Rosario Capra turns 11 years old. He will go on to make some of the most beloved films of all-time.

If you travel back in time, don’t expect to see any vinyl furniture. Vinyl won’t invented until 1928.