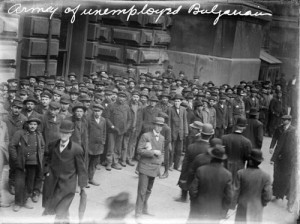 One of the big issues being debated in Chicago is the influx of “undesirable” immigrant types. Chicago society is up in arms, and they aren’t afraid to say so publicly. Frances E. Hamilton is quoted in this week’s Chicago Tribune. He states the case of his social class this way: “Men of alien races, mixed in blood, and of many tongues, are often the last results of effete and decaying civilizations. We no longer receive from the best, but from the mediocre and the worst.”

Who is Frances E. Hamilton referring to? Italians, Poles, Russians, and Bulgarians are currently arriving in the largest numbers. And many of them, to the dismay of Chicago’s largely White Anglo-Saxon Protestant population, are Catholics or Jews. (Photo: “Army of unemployed Bulgarian men,” from the Daily News Collection at the Chicago Historical Society)

*The Cubs celebrate St. Patrick’s day in spring training by playing an intra-squad game: the Irish (Evers, Chance, Sheckard, Brown) against the Germans (Zimmerman, Reulbach, Schulte, Steinfeldt, Kling, Hoffman). Nearly every player on the Cubs falls into one of those two categories. The game ends in a 4-4 tie.

Samuel Horwitz celebrates his 13th birthday on St. Patrick’s Day in Brooklyn. His mother is Lithuanian and when she tries to say “Sam” it comes out sounding like “Shemp”. That’s what his two younger brothers, Moe and Jerome, call him. Eventually all three of the Horwitz Brothers will move West to Hollywood, change their last name to “Howard” and become famous in the Three Stooges.

• Former President Grover Cleveland is still alive, and is celebrating his 71st birthday this week (March 18). He is quite ill.

• Famed lawman Wyatt Earp turns 60 this week (March 19). It has been twenty seven years since his Gunfight at the OK Corral. He has just returned from a stint as a saloon owner in Alaska, and now lives in Hollywood, where he will live out the rest of his life. He dies in 1929.

• A little baby is born in Muskegon, Michigan (March 20). Frank Stanton will grow up to found CBS.

• On the same day, another little boy is born in Bristol, England. Silent film actor Roy Redgrave is less than thrilled at the arrival of his son, Michael. He will abandon the child before Michael’s first birthday. Michael will eventually become an actor too, and so will his daughters, Vanessa and Lynn.

• Meanwhile, in the affluent suburb Jersey City, New Jersey, young Oswald Nelson is celebrating his second birthday (March 20). He will become known as Ozzie, and along with his wife Harriet will have some adventures.

Price Check: A 34″ by 16″ by 12″ granite cemetery monument is only $72. The Sears, Roebuck and Company catalog begs that you “give us eight weeks to finish, letter, and ship.” Estimated weight: 2890 pounds.

If you travel back in time, you may notice the city looks a little different at night. Neon lights won’t be invented until 1912.