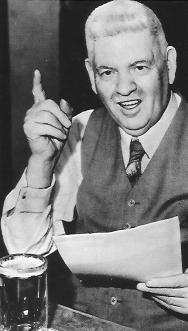 Meet “Bathhouse John” Coughlin. He is one of the aldermen from Chicago’s notorious First Ward. Along with his partner in crime (literally), Hinky Dink Kenna, Bathhouse protects Chicago’s thriving vice trade in the Levee district. He acts as the middle man for his “constituents” (the madames, the pimps, and the drug dealers) in their “transactions” with the police. Naturally, he takes his share right off the top. In the process, he becomes a very wealthy man.

He does his business in the most brazen way imaginable. Every year he throws a huge party called the First Ward Ball, to which he invites all the other politicians from Illinois. He stocks the joint to the gills with hookers and booze and promises a “good time for all.” It’s so popular that the event is held at the largest venue in town, the Chicago Coliseum–which will hold the Republican Convention later this year.

Coughlin wasn’t born into the political world or the vice business. He was a self-made man. His father’s business, a grocery store, was destroyed by the Great Chicago Fire. Bathhouse used to say: “If not for that bonfire, I might have been a rich man’s son and gone to Yale, and never amounted to much.”

This video shows the old Coliseum and what is there now…

The new Cubs uniform debuts this week, the first one ever to sport a “Cubs” logo. The logo features a bear holding a bat. This logo cements the Cubs name, which is really only a few years old. However, that uniform didn’t arrive to their spring training facility in Mississippi without issues. Manager Frank Chance actually forgot the suitcase with the uniforms at the train station in Chicago last week. It was recovered and sent down to the Cubs, but Chance didn’t have a key to open it. So, he enlisted the help of the porter who “trains the bulldog that fights the badgers”. The porter’s bulldog managed to get it open in time for the Cubs first game.

Elsewhere in the news this week…

~Honus Wagner announces his retirement (March 16). Of course, he changes his mind a few weeks from now and goes on to play 151 games. Wagner, by the way, is probably the most popular player in baseball. He became the first major league player to endorse a product (Louisville slugger) in 1905. By opening day in 1908, baseball players will be endorsing all sorts of products from cigars to toothpaste.

~Lawrence Welk turns 5 years old (March 11). He and his German-speaking immigrant family are living in Strasburg, North Dakota. Welk won’t learn English until he turns 21 and will always speak it with an accent.

~Albert Einstein turns 28 (March 14). He is the privatdozent at Bern University in Bern, Switzerland and is working on a paper explaining why the sky is blue.

~Little Henry Youngman turns 2 years old in Liverpool England (March 16). His family will emigrate to the United States this year. He will later become famous as “Henny Youngman, king of the one-liners.”

At The Movies: This film is entitled “The Frog” and it was originally released in France…

If you travel back in time, don’t be surprised if people are a little too giddy about paper towels. They are a brand new invention, and they’re only available in bathrooms at really fancy hotels.