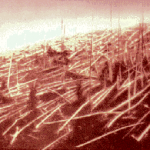 Here’s what we know about it now. An explosion of this magnitude is capable of destroying a large metropolitan area. It was roughly 1000 times as powerful as the bomb dropped on Hiroshima, Japan, and knocked over an estimated 80 million trees over 830 square miles.

*The Democratic Convention is held in Denver. The Democrats nominate the most gifted orator in the United States: William Jennings Bryan. People were still talking about his incredible speech from 1896. 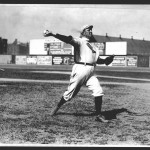 *Ed Reulbach pitches a two hitter in Cinci to defeat the Reds (July 1) In that same game, Johnny Kling is injured by a foul ball off his thumb. He will be out for three weeks, probably the biggest loss the Cubs have suffered in a year full of injuries.

*Despite the loss of Kling, the Cubs win a double header on July 4th in Pittsburgh, knocking the Pirates out of first place, and returning the Cubs back to first. 30,000 plus fans come out to see the game in stifling heat. Brown pitches a shutout in Game 1, pitching on one day of rest.

*The Cubs return to Chicago on July 5th, and Ed Reulbach almost misses the game because he got off the train in Cleveland to buy some fried chicken, and didn’t make it back before the train took off. He had to catch another train, and could only afford to pay for a ticket by selling back his chicken. Jimmy Slagle and Frank Chance are both injured in the game, and the Cubs lose 10-5.

*Thurgood Marshall is born in Baltimore, Maryland on July 2nd. He will one day become the first African-American member of the Supreme Court.

*George M. Cohan (born on the 3rd of July) is the toast of Broadway with his fifth hit show “The Yankee Prince.” Next decade he will be awarded the Congressional Gold Medal for inspiring the nation during World War 1 with his songs “Over There” and “You’re a Grand Old Flag.” He is 30 years old. (Click on his name and watch him sing and dance in Blackface on stage with Jimmy Durante).

*Calvin Coolidge (July 4) is a 36 year old state representative in the Massachusetts legislature. (Click on his name and watch the spellbinding Coolidge do the first filmed Presidential speech with sound in 1926)

Price Check: Socks “guaranteed to wear 6 months!” are $1.36 for a box of six pairs. The guarantee only applies if worn alternately and changed two or more times each week.

If you travel back in time, don’t be offended if no one invites you to a Tupperware party. Tupperware won’t exist until 1948.