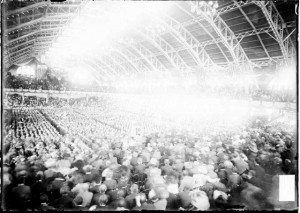 The Republican Convention comes to the Coliseum in Chicago, June 16-19. Teddy Roosevelt is one of the most popular Presidents in history, but he has decided not to seek a third term. On the second day of the convention, however, the mere mention of Roosevelt’s name by convention chairman Henry Cabot Lodge triggers a 49-minute chant of “four, four, four years more.”

The delegates aren’t crazy about Roosevelt’s hand-picked successor, but after it becomes obvious that Roosevelt won’t change his mind and run again, the Republicans please the President, and the Ohio delegation by nominating their native son, Secretary of War William Howard Taft.

The Republican platform in 1908 reinforces their commitment to the Gold Standard, suggests instituting a Federal Reserve, supports the buildup of the United States Armed Forces, urges environmental conservation, and recommends the general reduction of the American work week.

*The Cubs win in NY, in a game that was interrupted by the announcement of who won the presidential nomination. The fans were mad the game was interrupted. The Cubs won the game because third baseman Harry Steinfeldt knocked over the Giants runner while the ump wasn’t looking, and the runner (Larry Doyle) was out at the plate.

*Other than that game, however, it isn’t a great week for the Cubs. The biggest crowd in Polo Grounds history (at the time), more than 25,000, sees Christy Matthewson three hit the Cubs, 4-0 (June 20). The Cubs lose again the next day, 7-1. It kills manager Frank Chance to lose 3 out of 4 to his most despised rival.

*For the week the Cubs are 3-4, and are clinging to first place by the skin of their teeth.

*The first flight that travels more than one kilometer occurs. The plane belongs to famous inventor Alexander Graham Bell. (June 20) 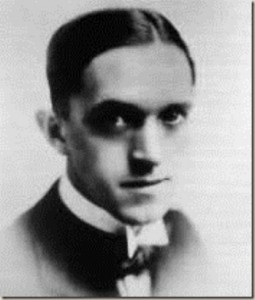 *One of Charlie Chaplin’s best friends, Arthur Jefferson (photo), turns 18 (Jun 16) in England. They perform in the same acting troup, and Arthur is Charlie’s understudy. In ten years they’ll come to America on a tour, and Arthur will adopt a new stage name: Stan Laurel. He’ll appear in 65 films without longtime partner Oliver Hardy, and more than 100 as 1/2 of Laurel and Hardy.

*In Russia, Igor Stravinsky turns 25 (Jun 17). He has recently given up his law studies to focus on music.

*The vixen that will force King Edward to abdicate his throne, Wallis Simpson, is still known as Bessie Warfield. She is 12 years old.

*Meanwhile in France, Jean-Paul Satre turns 3 (Jun 21), and isn’t even depressed yet. He is two years younger than John Dillinger (Jun 22) who turns 5 in Indiana.

Price Check: Two special “Just for 1908” patterns of carpeting will only set you back 30 cents a yard.

If you travel back in time, don’t ask for a daiquiri at the corner tavern. Blenders won’t be invented until 1922.