Meet Hinky Dink Kenna, one of the two Aldermen who represent Chicago’s red-light district, The Levee. The official name of the area, of course, is the First Ward, and Alderman Kenna is a proud and vocal supporter of his constituents.

If anyone asks about the seediness of his ward, he has a standard defense of the neighborhood that contains mostly saloons, brothels, and drug dens: “Isn’t it better to segregate the worst elements of society into one neighborhood? That way anyone that goes there knows what he’s getting into, and if something bad happens, then shame on him.”

He doesn’t know it yet, but the days of the Levee are numbered. It won’t be taken down by the Democrats in Chicago who run everything thanks in no small part to Hinky Dink’s efforts. In the forty years he ran the First Ward with co-Alderman John Bathhouse Coughlin, the Democrats never lost a single election in his ward.

The Levee will be taken down by bipartisan outrage in Springfield, Illinois, and the newspapers of Chicago, who eventually shame the Chicago police and some Chicago politicians (namely the Mayor) to crack down on the rampant illegal activities taking place in Hinky Dink’s ward. 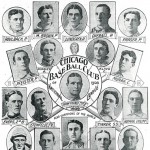 *In Boston, the Cubs lose to the Braves 14 to nothing. Rookie Carl Spongberg pitches his only game for the Cubs, giving up 8 hits, 7 runs, 6 walks, and 2 HBP. It is such a stinker that the Braves started making outs on purpose just so the game would end. Spongberg came in from Utah for the day of the game, and was sent right back after the game was over. (Aug 1)

*That’s their only loss of the week, however. The Cubs go 6-1 this week, but they only gain one game on New York, and remain in second place.

*In New York, the Giants are getting very cocky. With his team winning 9-2, Fred Tunney steals second base for the Giants. Just to be funny, on the next pitch, he goes back to first base. His opponents, the worst team in the National League (the Cardinals), don’t think it’s so funny. (July 31)

*The design for “the greatest ship in the history of the world” is approved on July 29th. It’s announced that it will be called The Titanic and is already being described as “unsinkable.” It will take nearly four years to build.

*The Around the World Auto Race ends (July 30)

*Benito Mussolini turns 25 (July 29). He is doing office work for the Socialist Party in Trento, Italy. *In Detroit, Henry Ford (photo) is working on an assembly line approach to making automobiles as he celebrates his 45th birthday on July 30th. His Model T will debut the week the World Series begins.

*Casey Stengel turns 17 (July 30). He will begin his minor league career next season as a way to earn some money for Dental school.

*Beatrix Potter (July 28) is 42. Seven years ago she published her first story, “The Tale of Peter Rabbit.”

If you travel back in time to South Dakota, don’t bother going to Mt. Rushmore. It won’t be completed until 1923.