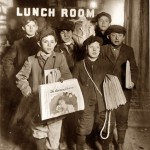 A little boy celebrates his 9th birthday in Brooklyn on January 17th. His father Gabriele, a barber, and his mother Teresina, a seamstress (shown in this picture with the little tyke), must have been proud of their fourth son. He moved to Chicago in 1919 when his friend Johnny Torio summoned him. By then, sadly, he had a big scar on his face. He did manage to move up the corporate ladder pretty quickly, however, thanks to a number of untimely deaths to his superiors. By 1925 he was running Chicago. His name is Alphonse Capone. (Photo: Newsboys in Brooklyn)

In other events this week. Astrology buffs take note. Two babies were born this week who pursued almost identical careers. Oops, wait. Check that. Astrology is a crock.

January 15: A boy is born in Budapest, Hungary. His name is Teller Ede. He later uses the Americanized name Edward Teller, and becomes the Father of the hydrogen bomb.

January 16: A girl is born in Queens, New York. Her name is Ethel Agnes Zimmerman. She later uses the stage name Ethel Merman, and becomes a star on Broadway.

January 20: In New York City, a twelve year old boy named Nathan Birnbaum is celebrating his fifth year as a member of the work force. He has worked as a shoe-shine boy, an errand boy, a newspaper salesman, and in a syrup factory, but for the past two years he ‘s been trying to make a go of it in Vaudeville as a trick roller skater. His stage name is George Burns.
Video: George Burns tries to buy a sweater from WC Fields

At The Movies: 1908 French Film “Physician of the Castle”