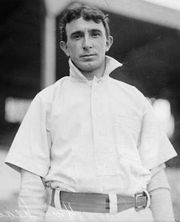 Major League teams from the Northeast and the Midwest are getting ready to attend spring training for the 1908 season. Why isn’t everyone else going? There isn’t anyone else. Only ten cities have teams (New York, Chicago, Detroit, St. Louis, Cleveland, Pittsburgh, Cincinnati, Philadelphia, Boston, and Washington). There are no Major League teams west of St. Louis, or south of the Mason-Dixon line.

In his hometown of Kansas City, Cubs catcher Johnny Kling (photo) isn’t thinking of baseball quite yet. He is taking care of his brand new pool hall, and celebrating his 33rd birthday (Feb 25). Kling is a bona-fide pool shark. He’ll sit out the 1909 season to pursue and win the World Pockets Billiard Championship. He’s also one of the best catchers in baseball; a grizzled veteran who is so good defensively, he caused former catcher Frank Chance to move positions (to first base). Ask Mordecai “Three Finger” Brown why he had such a great season in 1907, and he’ll tell you that his secret weapon is Johnny Kling.

Kling (nicknamed “Noisy” and “The Jew”) is loved by his teammates (because of his gritty attitude), loved by the umpires (because he doesn’t swear, smoke or drink), and loved by the fans. He is the starting catcher for all four pennant winning teams in the first decade of the century (1906, 1907, 1908, 1910), and the pitchers will claim that his absence, and his absence alone, is the only reason the Cubs didn’t win five pennants in a row.

After a salary dispute, the Cubs will trade him in 1911.

~Frederick Bean Avery (photo) is born in Taylor, Texas. (Feb 26) He will graduate from North Texas High School in 1927–where the popular slang phrase was “What’s Up Doc?” After graduation he’ll move out west to Hollywood, adopt the nickname “Tex”, get a job as an animator, and create two of the most beloved cartoon characters of all-time: Bugs Bunny and Daffy Duck.

~Theodore Geisel is celebrating his 3rd birthday this week. (March 2) He and his family live in Springfield, Massachusetts. His father is a brewmaster and his mother is known for her rhymes, which she tells little Teddy every night before he goes to sleep. After he becomes an adult, and changes his name to Dr. Seuss, he comes up with a few rhymes of his own.

~Abe Vigoda is not even an apple in his parent’s eye. He won’t be born for another thirteen years, on Feb 24.

Price Check: A brand new horse-drawn buggy, with padded and lined green-cloth seat and heavy curtains, “complete with double braced shafts and steel tires,” is only $46.75. Rubber tires are $13 extra. (Horse not included)

If you travel back in time, and you’re feeling a little stinky, you can get anti-perspirant. It’s sold under the counter at drugstores to women who are too embarrassed to buy it openly. If you’re a man, forget it. Men don’t start using it until the 1930s.