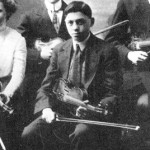 This young violinist, Benny Kubelsky, is a Cubs fan living in Waukegan, Illinois. He turns 14 years old on Valentine’s Day. Three years from now he’ll have a chance to join the Marx Brothers on tour, but his mother won’t let him. So, he pursues a Vaudeville career of his own, and does fairly well.

His stage name is Jack Benny.

Benny later takes his Vaudeville act to the radio, where he becomes one of the biggest stars in the country. He turns 39 in 1933, the year after his radio career takes off, and never admits to being any older. It becomes one of his most famous running gags.

A middle school in his hometown of Waukegan is named after him, and the team is called the “39ers” after his famous joke.

~The New York to Paris auto race begins on February 12th. It is the biggest story in the world this week. How did that work? The video below tells the story…

~Bill Mack celebrates his 23rd birthday (Feb 12), not knowing that he will pitch the only two games of his major league career for the Cubs in 1908.

~Cubs pitcher Carl Lundgren (a U of I product) celebrates his 28th birthday (Feb 16). He was a member of the last two World Series teams, but didn’t get to pitch in either series because the other starting pitchers were even better. (Even though he had a 1.17 ERA in 1907). Later in life he will become the head baseball coach at the University of Michigan, replacing Branch Rickey.

~A baby is born in New York (Feb 17). Red Barber will one day become a famous sportswriter and broadcaster. He will be six months old when the Cubs win their World Series.

Price Check: Albi-Denta Tooth Soap, which comes in an attractive metal box, and is warranted not to be “injurious,” can keep your teeth and gums scrubbed for a mere 25 cents.

If you travel back in time, go ahead and brush your teeth, but realize one thing: Nylon-bristle toothbrushes won’t exist until 1938. Those toothbrushes you see still have “hoghair bristles.”