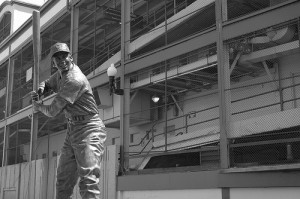 The Cubs opened their 2008 season at Wrigley Field by unveiling the statue of Mr. Cub, Ernie Banks. The statue was given a place of honor on the corner of Clark and Addison right by Wrigley Field’s main gate. Ernie was on hand to commemorate the honor, and so were a bevy of celebrites, including his long-time teammate and friends Billy Williams and Ron Santo, plus the legendary Hank Aaron. The video below shows some of the highlights from that cold, rainy, March day…

March 10, 1933
On this day in 1933, the Cubs were playing in Wrigley Field in Los Angeles (Wrigley West), and experienced the downside of conducting their spring training in California. During an exhibition game between the Cubs and Giants, a substantial earthquake occurred. Players from both teams huddled around second base until the tremors stopped.

The Giants didn’t seem too affected by the quake. They went on to win the National League and then beat the Senators in the World Series, 4 games to 1. The Cubs finished in third, six games back.

One Response to “This Month in Wrigley Field History (March)”