We are not besmirching Palm Sunday. In fact, we’re at church right now.

On the other hand, Palm Sunday does seem like the most thematically appropriate day to present for you two Cubs pitchers who famously used the palmball. 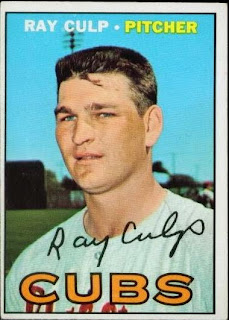 ~Ray Culp 1941 (Cubs 1967)
Ray Culp was already a two-time 14-game winner when the Cubs acquired him before the 1967 season, and they gave up former 20-game winner Dick Ellsworth to get him from the Phillies. But in his only season with Chicago, Culp was mediocre, managing only 8 wins. He also didn’t hit it off with the manager of the team. Leo Durocher felt he couldn’t trust Culp to be a big contributor, so the Cubs shipped him off the Boston Red Sox after the 1967 season in exchange for minor league outfielder Bill Schlessinger. This turned out to be one of the worst trades of the Durocher era. Schlessinger never played in a single game for the Cubs, while Ray Culp discovered the palmball and became one of the best pitchers in the American League. He won 16 games in 1968, 17 games in 1969, 17 games in 1970, and 14 games in 1971. During those same years, the Cubs always seemed to be one starting pitcher short of competing for a title. (Photo: Topps 1967 Baseball Card)

~Dave Giusti 1939 (Cubs 1977)
Giusti won 100 games and saved 145 more in his outstanding career, including 30 in his all-star 1971 season, when he led the Pirates to the World Series. His best pitch was the palmball. By the time he came to the Cubs, however, he was a whisper of what he once was. He did get one save in 20 appearances, but his ERA was 2 1/2 runs higher than his career average. It was the last gasp of his big league career.