On this Indepedence Day, we celebrate these Free Men who must have felt this day had a certain significance to them… 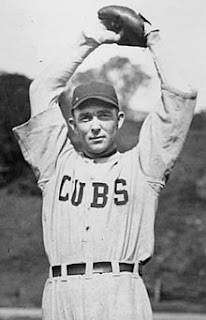 ~Buck Freeman 1896 (Cubs 1921-1922)
Freeman was part of the starting rotation of the Cubs in 1921 as a rookie, alongside the likes of Hall of Famer Grover Cleveland Alexander. Buck didn’t impress. He won 9 games, but he only struck out 42 batters in 177 innings. He got one more shot the following year and was hit hard. That was the end of his big league career.

~Hersh Freeman 1928 (Cubs 1958)
Freeman’s nickname was Buster. Unfortunately for the Cubs, that nickname may have described what he could do to close games when he came in from the bullpen. He had been a pretty solid reliever for the Reds (he won 14 and saved 18 in 1956) and the Cubs thought he was worth the gamble when they traded Turk Lown for him in the middle of the ’58 season, but in 13 innings for the Cubs he gave up 23 hits and 12 runs and never pitched in the big leagues again. Turk Lown, by the way, was traded by the Reds to the White Sox, and became a key member of their 1959 Pennant Winning pitching staff.

~Mark Freeman 1930 (Cubs 1960)
The 29-year-old got the most extended shot of his career with the Lou Boudreau-managed Cubs of 1960. He appeared in 30 games and posted an ERA of 5.63. It was also his last chance in the big leagues. The big righthander (6’4″) hung up his spikes after the Cubs cut him loose following the season.

~Mike Freeman 1987 (Cubs 2017-2018)
After having an embarassment of riches in infield prospects for several years, and trading many of them away, the Cubs found themselves shorthanded in August of 2017 when Addison Russell suffered an injury. They signed Freeman off waivers from the Dodgers and he did get significant playing time during that month. Unfortunately for Mike, he and his Cubs teammates were eliminated from the playoffs by his former Dodger teammates in the NLCS. Freeman spent the entire 2018 season in the minors, but did return for one plate appearance in September. He sacrificed, which didn’t technically count as an at bat.