Historical Events (October 16–October 22): Where were the Cubs? 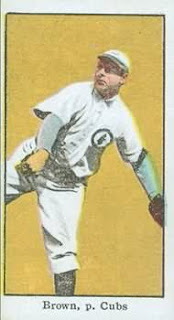 October 18, 1910
The Cubs played Game 2 of the World Series against the A’s in Philadelphia. The team had to feel like they were snake-bitten that year. With Johnny Evers already sidelined with a broken leg, Mordecai Brown (the scheduled starting pitcher of Game 2 and the team’s best pitcher) got into an auto accident just before the game. He pitched anyway, and lost uncharacteristically 9-3. The day before Game 3, manager/first baseman Frank Chance got into a fist fight on the streets of Chicago. A heckler was giving him a hard time as he drove by, so Chance stopped the car, jumped out, and attacked the guy. Then in Game 3, Chance became the first person ever ejected from a World Series game when he went crazy arguing a disputed ground rule double.

The A’s won the Series in 5 games.

This officially ended the Cubs dynasty. In a five year stretch 1906-1910, they had won four pennants and two World Series. In the next hundred years they would win only five more pennants, and we’re still waiting for another World Series title.

October 16, 1900. Mark Twain returns to the United States after living in Europe for the past ten years. Future Hall of Famer Goose Goslin is born in New Jersey. He will later get the game-winning hit to defeat the Cubs in the 1935 World Series.

October 17, 1962. The Soviet Union launches their Kosmos-10 satellite, which will allow them to increase their spying capabilities. The Cubs trade George Altman, Moe Thacker, and Don Cardwell to the Cardinals for Larry Jackson, Lindy McDaniel and Jimmie Schafer.

October 18, 1910. The crew of the dirigible “America” is rescued at sea thanks to the first distress signal ever sent from the air. The Cubs are in Philadelphia to play the Philadelphia A’s in Game 2 of the World Series. The A’s win 9-3 after scoring six runs against Mordecai Brown in the bottom of the 6th. (See full story above)

October 20, 1972. The NBA’s Buffalo Braves score 58 points in the fourth quarter, and still lose to the Boston Celtics, 126-118. The Cubs trade Tom Phoebus to the Atlanta Braves for Tony LaRussa.

October 22, 1910. Russia passes a law banning the immigration of Germans in their westernmost provinces (now part of Poland). The Cubs take on the A’s in Game 4 of the World Series. Rookie King Cole wins the game for the Cubs, their only win of the series.