Historical Events (June 5–June 11): Where were the Cubs? 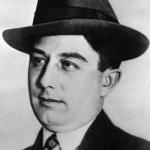 June 9th, 1930
Chicago Tribune reporter Jake Lingle was on his way to the racetrack, walking toward the underpass at Randolph and Michigan Avenue that led to the Illinois Central Suburban Trains. Jake Lingle had worked on thousands of stories for the Trib, but never actually wrote them. He simply called them in from the field. And boy did Jake play the field. Thanks to his close relationship with the police commissioner and many members of the Chicago Outfit, Lingle always knew what was happening before it happened. What his employers at the Tribune didn’t know, however, was that Lingle was also lining his pockets by tipping off the mobsters.

As you might imagine, playing all the angles was a hire wire act, and it eventually caught up to him. Hardpressed by his stock market losses in the 1929 Stock Market Crash, he had gotten desperate and greedy. When Jack Zuta (Bugs Moran’s gang) was ready to reopen his gambling casino (Sheridan Wave Tournament Club at 621 Waveland), which had been closed since the Valentine’s Day Massacre, Lingle demanded 50% of net for protection (he usually charged 10%). When Zuta refused to pay, Lingle said: “If this joint is opened up, you’ll see more squad cars in front ready to raid it than you ever saw in your life before.” (Lingle was best pals with the police chief).

The Sheridan Wave was scheduled to reopen on June 9th, the day Lingle was on his way to the racetrack. He never saw the man who put a gun behind his ear and pulled the trigger of the 38 caliber detective’s special. Lingle died instantly. Unshockable Chicago was shocked by this murder in broad daylight. Up until now the Outfit had only been killing each other, but this was different. It appeared that hey had killed a civilian; a reporter. And the motive appeared to be nothing more than his uncanny reporting ability. Colonel McCormick, the publisher of the Tribune, was outraged and published several editorials demanding justice. Lingle was given a hero’s funeral. 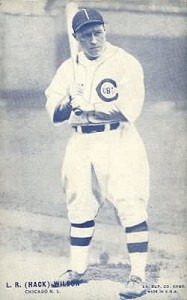 While this drama was unfolding on the front pages of the newspapers, the sports section was also reporting a memorable tale. The Cubs had just lost two out of three to Brooklyn, slipping a few games back, but they were an offensive juggernaut that nearly everyone believed would repeat as NL champs. Future Hall of Famer Rogers Hornsby had broken his leg and wasn’t much help after May, but the team still had future Hall of Famers KiKi Cuyler (134 RBI, 37 SB, .355) & Gabby Hartnett (37 HR, 122 RBI, .339), 20-game winner Pat Malone, and the most feared slugger in baseball–Hack Wilson. The squat little man named Hack was in the middle of a season that no one could comprehend. He hit 56 home runs, drove in a (still record) 191 runs, had more than 200 hits, and hit .356.

Unfortunately, as the Jake Lingle drama unraveled (the newspaper discovered Lingle lived like a king and owned several houses–almost impossible on his paltry newspaper salary), and Colonel McCormick was forced to concede his slain reporter was indeed crooked, the Cubs season unraveled as well. Despite having a big lead at the beginning of September, the Cubs staggered to the finish line. They ended the year in second place, 2 full games behind the pennant winning St. Louis Cardinals.

Leo Brothers was convicted of Lingle’s murder, but surprisingly, only got 14 years in prison. When told of his sentence he reportedly said: “I can do that standing on my head.”

June 5, 1968. Senator Robert Kennedy is assassinated in Los Angeles by Sirhan Sirhan. The Cubs lose to Tom Seaver and the Mets at Wrigley Field, 4-2. Ernie Banks drives in both runs for the Cubs.

June 6, 1944. D-day: Allied Forces hit the beaches at Normandy. Baseball takes the day off in support. The Cubs are in Brooklyn and trade Eddie Stanky to the Dodgers for Bob Chipman. Stanky would become a three-time all-star with the Dodgers, and lead them to the World Series.

June 7, 1962. The first drive-through bank in the world opens in Switzerland. The Cubs beat the Giants 4-3 at Wrigley Field. Shortstop Andre Rogers is the hitting star, knocking in three of the four runs.

June 8, 1949. FBI report names Hollywood stars as communists, including Edward G. Robinson. The Cubs lose 3-1 to Brooklyn at Ebbets Field thanks to the hitting of Jackie Robinson.

June 9, 1954. In a moment considered the turning point of anti-communist hearings, Senator Joseph McCarthy is called out by Army lawyer Joseph Nye Welch, who says “Have you no sense of decency, sir, at long last?” The Cubs lose a double-header to the Phillies at Wrigley Field. Former Cub Smoky Burgess knocks in the winning run in the opener.

June 10, 1935. Alcoholics Anonymous is founded in New York City by two recovering alcoholics, a broker and a physician. The Cubs are on a train from St. Louis to Philadelphia after getting beaten by the hard partying Gashouse Gang and their star pitcher Dizzy Dean.

June 11, 1955. A car goes out of control and crashes into the crowd during the 24-hour race in Lemans, killing 82 spectators. The Cubs lose to the eventual World Series champion (Boys of Summer) Brooklyn Dodgers 4-3 at Ebbets Field. Duke Snider homers to win the game.