Historical Events (July 31–August 6): Where were the Cubs?

August 2, 1923
President Warren G. Harding dies unexpectedly. He wasn’t from Chicago, but Chicago nevertheless played an important role in the his presidency. For one thing, in 1920 he was nominated by Republican party leaders in a smoke filled Chicago hotel room; Suite 4046 on the 13th floor of the Blackstone hotel. Harding had lots of powerful friends in Chicago who helped propel him to the Presidency. A minority owner of the Cubs, Albert Lasker, was actually one of those Republican operatives who helped Harding secure the nomination in that smoke filled room.

Harding even attended a Cubs game during the Presidential campaign, at the invitation of a big supporter and friend; Cubs majority owner William Wrigley. After he was elected, Harding invited his all-time favorite baseball player, Cubs legend Cap Anson to the White House. But it was another minority Cubs shareholder, Harry Sinclair, that really had an impact on the Harding Presidency. He was at the heart of Harding’s biggest scandal, Teapot Dome. In 1922, Albert B. Fall, U.S. Secretary of the Interior, leased, without competitive bidding, the Teapot Dome fields to Sinclair. When the Senate got wind of this, they investigated.

It was found that in 1921, Sinclair (photo) also “loaned” Secretary Fall a large amount of money. Fall was indicted for conspiracy and for accepting bribes. Convicted of the latter charge, he was sentenced to a year in prison and fined $100,000. Sinclair was acquitted, but was subsequently sentenced to prison for contempt of the Senate and for employing detectives to shadow members of the jury.

Most of this was discovered after Harding’s death on August 2, 1923. That’s not all investigators discovered. During his time in his office, his veteran Bureaus chief skimmed profits from war surplus sales, bootlegged drugs to dealers, and took kickbacks from purchasing agents; his Alien property Custodian took bribes—using Harding’s Attorney General’s personal aide as a bagman; and Harding also had a young mistress, mother of his illegitimate child, and another mistress, who was inconveniently married to one of his friends.

Nevertheless the Republican party and the Chicago Cubs emerged from these scandals unscathed. The Republicans won again in 1924, and the Cubs overcame the loss of Harry Sinclair. They finished the 1923 season 12 games over .500.

July 31, 1875. Former president Andrew Johnson dies of a stroke in Tennessee. The Cubs (then known as the White Stockings) are already a team—the year before the National League is founded. They beat the Athletics in Philadelphia, 6-3. That 1875 team plays their home games at 23rd Street Park in Chicago, and will not hit a home run the entire season.

August 1, 1996. Sprinter Michael Johnson breaks the world record in the 200 meters to win the gold medal in the 1996 Atlanta Summer Olympic Games. Jamie Navarro and the Cubs beat the Colorado Rockies at Wrigley Field, 4-1. Sammy Sosa triples and homers for the Cubs.

August 2, 1876. Gunslinger Wild Bill Hickok is murdered in Deadwood South Dakota while playing poker. He has a pair of black eights and a pair of black aces, now known as the Dead Man’s Hand. The first place Cubs (then known as the White Stockings) are in Louisville, celebrating their 15-7 win over the Louisville Grays.

August 3, 1923. Calvin Coolidge is sworn in as president of the United States after the sudden death of Warren Harding. There are no games played in Major League Baseball, as the nation mourns the death of the president. The Cubs are in Brooklyn, and will begin a series against the Dodgers the following day.

August 4, 1892. Lizzie Borden’s parents Andrew and Abby are found dead, and Lizzie is arrested and tried for the crime. She is found not guilty. The Cubs (then known as the Colts) are far away, playing the Browns in St. Louis—the westernmost franchise in baseball. The last place Browns win, 6-1.

August 5, 1962. Marilyn Monroe is found dead in Los Angeles beside an empty bottle of pills. She was only 36. The Cubs are in town, playing a double header against the Dodgers. They lose the first game, and win the second, behind the pitching of Don Cardwell and the hitting of catcher Dick Bertell.

August 6, 1945. The Allies drop the Atomic bomb on Hiroshima. America will celebrate V-J Day in eight days. The first place Cubs are on their way to Boston (from Cincinnati) to face the Braves. 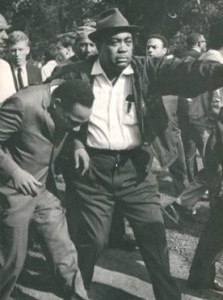 August 5, 1966
Martin Luther King is in Chicago, leading a march through Gage Park and is hit in the head with a brick. It is the culmination of a very tumultuous few months for the civil rights leader in Chicago.

When Martin Luther King announced in January of 1966 that he was coming to Chicago, he had no idea what was in store for him here. Dr. King brought his entire family with him and moved into an apartment in one of the worst neighborhoods of Chicago. His idea was to bring attention to the living conditions of African-Americans in big cities and lead the fight against housing and employment discrimination in the city. (Chicago was notoriously bad in this regard, and is sadly still considered one of the most segregated cities in America)

King got some headlines, but he wasn’t making the kind of progress he hoped he would. That’s when he began a slightly more aggressive approach to his “open housing” campaign; leading protest marches into all-white neighborhoods. He discovered quickly that the lyrics to “My Kind of Town” (“My kind of people too, people who, smile at you”) didn’t apply to everyone. He later said that the reception he received in Chicago was worse than anything he encountered in the deep south.

While Martin Luther King was leading the protests in Chicago, Leo Durocher was taking the helm of the Chicago Cubs for the first time. He proclaimed: “This is no eighth place team,” as they went through their spring training drills in Long Beach, California.

He was right. They were a tenth place team.

Although, with Leo at the helm, the Cubs started making progress. In April they acquired an outfielder named Adolpho Phillips in a trade with the Philadelphia Phillies. Phillips had a couple of so-so years for the Cubs, but it was the player they acquired with Phillips that helped transform the team—Ferguson Jenkins. He became the ace of the staff.

While Martin Luther King was being greeted with vicious attacks and insults (not to mention the brick in the head) during his marches through white neighborhoods in Chicago, the white baseball fans of Chicago were embracing the black players on the Cubs. All three Cubs outfielders were black (including the very popular Billy Williams), as was the most popular player on the team, first baseman Ernie Banks, and the new ace, Ferguson Jenkins.

But 1966 was a very bad year for the Cubs, and the mercurial Leo Durocher didn’t respond very well to losing. In August, while Martin Luther King Jr. and Mayor Daley were coming to a much-maligned agreement to pursue fair housing in Chicago, Leo Durocher was erupting in the Cubs dugout during a game against the Astros in Houston. Bob Aspromonte hit a grand slam in the bottom of the ninth to beat the Cubs that day, 7-4.

It was a microcosm of the 103-loss 1966 season, tied for the worst year in Cubs history. Nevertheless, Cubs fans felt that the pieces were slowly but surely being put into place. Catcher Randy Hundley emerged as the starter, as did Glenn Beckert at 2B, and Don Kessinger at SS, and they knew, just knew, that the Cubs were on their way to accomplishing something special.

Unfortunately that promise turned out to be as empty as Mayor Daley’s promise to Martin Luther King Jr.

2 Responses to “Historical Events (July 31–August 6): Where were the Cubs?”