Historical Events (July 17–July 23): Where were the Cubs?

July 18, 1910
The poem “Baseball’s Sad Lexicon” written by Franklin Adams was published in the New York Evening Mail. It’s probably the most famous poem ever written about the Cubs, and it was so memorable it probably got Joe Tinker, Johnny Evers, and Frank Chance elected into the Hall of Fame.

The poem went as follows…

Adams was, of course, a Giants fan. And Giants fans had seen just about enough of Tinker, Evers and Chance. After all, the Cubs had won four of the previous five pennants–and each time the Giants were their biggest rival.

1910 also marked the end of the Tinker to Evers to Chance era of dominance. They played their final game together early in the 1912 season.

Adams got the last laugh. He may have immortalized the Cubs double play combination, but in the next fourteen years the Giants were in the World Series seven times.

July 17, 1941. Joe DiMaggio’s 56-game hitting streak is snapped against the Cleveland Indians. The Cubs are in Philadelphia at Shibe Park. Their game is halted after six innings with the score tied 2-2. The coaching staff for the Cubs that season includes KiKi Cuyler, Dizzy Dean, and Charlie Grimm, but Jimmy Wilson is the manager.

July 18, 1925. Adolf Hitler publishes his manifesto “Mein Kampf”. The Cubs beat the Phillies 7-6 in ten innings at Baker Bowl in Philadelphia. The score had been 2-2 at the end of the ninth. Cubs pitcher Sheriff Blake pitches a complete game for the Cubs despite giving up four runs in the bottom of the 10th.

July 19, 1879. Gunslinger Doc Holliday kills his first man in a saloon in New Mexico. The man had been shooting at someone else when Holliday ended his life. The first place Cubs (then known as the White Stockings) lose to the Providence Greys at Lake Front Park in Chicago, 9-1.

July 20, 1969. Neil Armstrong becomes the first man to step foot on the moon. He says “One small step for man, one giant leap for mankind.” The Cubs are in Philadelphia, sweeping a double header against the Phillies. They are in first place, 4 ½ games ahead of the Mets.

July 21, 1925. The Scopes Monkey Trial ends in Dayton, Tennessee. John Scopes is convicted of teaching evolution. The Cubs are in Boston beating the Braves 15-3. Good buddies Charlie Grimm and Rabbit Maranville each have big days at the plate, knocking in seven of the 15 runs.

July 22, 1934. Public enemy #1 John Dillinger is gunned down outside the Biograph Theater in Chicago. His favorite team, the Cubs, lose to the Phillies in Philadelphia 6-5, when the Phillies score three in the bottom of the 12th against Charlie Root.

July 23, 1885. Former president Ulysses S. Grant dies of throat cancer in New York. He will be buried in the largest mausoleum in North America, and 1.5 million people will attend his funeral. The Cubs (then known as the White Stockings) are in the midst of another pennant winning season. They are in Boston beating the Beaneaters 12-2. John Clarkson gets the win, one of his 53 wins that season. 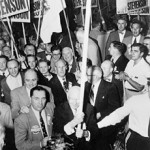 JULY 21, 1952
The 1952 Democratic National Convention is held at the International Amphitheatre (July 21 to July 26, 1952). There is a lot of drama in the Democratic race because the outgoing President Truman is extremely unpopular, and nobody is the obvious candidate to replace him. There are four major candidates: Governor Adlai Stevenson of Illinois, Senator Estes Kefauver of Tennessee, Senator Richard Russell of Georgia and Averell Harriman of New York.

Governor Stevenson is asked to give the welcoming address to the delegates. He does so only with the agreement that he isn’t considered to be the candidate. His speech, however, stirs the crowd, and the behind-the-scenes players in the stereotypical smoke-filled room try to figure out how to recruit him. After meeting with Jack Arvey, the “boss” of the Illinois delegation, Stevenson finally agrees to enter his name as a candidate for the nomination. The party bosses from other large Northern and Midwestern states quickly join in support. The convention then chooses Senator John Sparkman of Alabama, a conservative and segregationist, as Stevenson’s running mate.

While the Democrats are in town nominating Illinois’ own Adlai Stevenson, however, the Cubs are in Boston splitting a pair against the Braves and in Philadelphia, splitting a pair against the Phillies. It’s just the beginning of their longest road trip of the year. They won’t return to Chicago until August 11th. They play 20 games on the road trip, going 9-11. That road trip is a fair representation of the whole 1952 season. They finish the year at 77-77, in 5th place, 19 ½ games behind the pennant winning Dodgers.