Historical Events (August 7–August 13): Where were the Cubs? 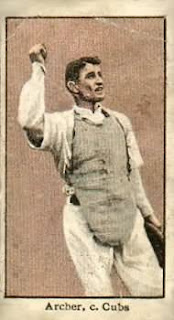 August 7, 1931.
Former Cubs catcher Jimmy Archer adds to his legend. Jimmy was one of the best players on the Cubs during his decade in a Chicago uniform, being named to the “All American” team three years in a row (1912-1914). His throwing arm was the envy of the league. Chief Meyers, the catcher of the Giants, was in awe. He said: “He didn’t have an arm. He had a rifle. And perfect accuracy.”

The Irish born Archer settled in Chicago after his playing days were over and on August 7, 1931, he was in the Chicago Stockyards when he saw two men dying in the cab of a truck. They were overcome with carbon monoxide gas. Archer pulled them out in time to save their lives, and then administered first aid to revive them.

The National Safety Council awarded him a medal for his heroism.

August 7, 1964. The U.S. Congress passes the Gulf of Tonkin resolution, escalating the war in Vietnam. The Cubs are in Pittsburgh for a double header against the Pirates. They win both games behind the pitching of Larry Jackson and Ernie Broglio. Ron Santo goes 5 for 8, and knocks in four runs.

August 8, 1974. Richard Nixon announces that he will resign the presidency, becoming the first president in American history to resign. The Cubs are in Philadelphia, and lose 2-1 to the Phillies. Future White Sox GM Ron Schueler knocks in the winning run, and gets the win for Philadelphia.

August 9, 1936. Jesse Owens wins his fourth gold medal during the 1936 Summer Olympic Games in Berlin, much to the chagrin of German Chancellor Adolf Hitler. The Cubs are in Chicago, playing a double header against the Pirates. They win both games, and it’s not close, 10-1 and 9-2. Billy Herman goes 5 for 9, scores three runs, and drives in four.

August 10, 1977. Son of Sam serial killer David Berkowitz is captured and arrested in New York City. The Cubs and Pirates play an 18-inning game at Three Rivers Stadium. Paul Reuschel pitches six shutout innings in relief, but the Pirates score on a sacrifice fly by Ed Ott in the bottom of the 18th against Pete Broberg.

August 11, 1919. The Weimar Constitution is adopted in war ravaged Germany. The Cubs are in New York in the midst of an eleven game set against Brooklyn and the Giants. Grover Cleveland Alexander gets three of the six Cub victories.

August 12, 1961. East Germany begins construction of the Berlin Wall. The Cubs lose to the Braves 8 to 6 in Milwaukee’s County Stadium. Hank Aaron and former Cub Frank Thomas both homer for the Braves.

August 13, 1982. The film “Fast Times at Ridgemont High” opens nationwide. The Cubs are in New York battling the Mets. Despite a homer from Bill Buckner, the Mets are victorious, 6-4.