Historical Events (August 21–August 27): Where were the Cubs? 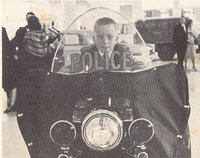 Johnny Conlisk is as “Chicago” as they come. Both his father and grandfather were high ranking members of the Chicago Police Department. Many other family members have been Chicago Police officers as well. His father advised him not to go into “the family business” and Johnny took him at his word. For many years, Johnny Conlisk was a character actor and model appearing in television commercials and newspaper and magazine ads. In 2004, Johnny and his wife, Janet Treuhaft formed Johnny-Sells.com, an eBay Trading Assistant company not far from Wrigley Field. I asked him to blog about the riots between the Chicago Police and the hippies at the 1968 Democratic National Convention. He was there, and has a unique perspective…

The Whole World is Watching

In August of 1968, when I was a 16 year-old kid just about to start my senior year in high school, I got to play a small part in the Democratic National Convention.

For months before the big event, city officials planned how to lay out the red carpet for the convention delegates. The first Mayor Daley formed the Chicago Host Committee. Thousands of volunteers were assigned to help the various state delegates find their way around town and stay out of trouble. You had to be connected to get one of these fun jobs and I was connected. My father was the chief of police.

Our first task was to greet delegates at O’Hare. We were issued candy striped vests and Styrofoam straw hats to identify us as Host Committee volunteers.

After that, I had hoped to be with the California or New York delegations where the action was. Instead, I was assigned to the tiny Guam delegation. They were very nice, but they weren’t movie stars or big time politicians.

We helped them find the shops on Michigan avenue and an off duty policeman would drive them out to the International Amphitheater. It was all pretty cool.

We heard about the anti-war protestors, they were on TV every night. But I guess our job was to keep the Guamanians away from all that during our 14-hour days of hosting, so it wasn’t at the top of my consciousness.

The big goal for all the kids volunteering was to get into the convention hall itself. There was little hope of that, however, because the town was full of important people who would get in before high school kids.

Then the word was passed down. Wednesday night, August 28, 1968 was my night to get into the convention hall. My friend, Bill Finucane and I went to the Amphitheater together. We were ushered into the second level gallery. We realized later that the Mayor’s people were packing the galleries. They knew there was going to be trouble that night and they wanted an audience that would be friendly to the Mayor. We listened to the speeches echo through the rafters of the craggy old hall.

Then we heard booing during the speech of Senator Abraham Ribocoff and we heard him say “Storm troopers in Blue”. Bill and I turned to each other. What was he talking about?

After that evening’s session was over, I got a ride back downtown to the Conrad Hilton. I didn’t know that a riot had taken place in front of the Hilton a couple hours earlier. I just knew that the Airport Bus that left from there made a stop near our house.

The first person I recognized was Jim Rochford, Deputy Chief of Police, my father’s best friend, and the guy in charge of the thousands of cops. “Hi, Mr. Rochford!” I said cheerily to the casually dressed chief.

“What are you doing here?” He asked incredulously.

“I’m waiting for the airport bus.”

I wandered over to the hippie’s side of the street.

As I stood on the curb on the edge of the crowd, my powder blue jacket flapped in the light breeze, revealing the candy-striped vest of the Chicago Host Committee. Suddenly, a baseball-sized rock flew just past my ear and landed on the trunk of a parked car with a loud bang.

I looked up and saw Rochford ordering two burly cops to come over and rescue me. The hippies mistook my rescuers for arresting officers. They booed loudly as I was gently dragged across the street.

“I told you to stay out of trouble!” Rochford barked as they put me in a squad car to drive me over to police headquarters, a couple blocks away.

Several hours later, the crisis eased, an officer gave me a lift home and the excitement was all over.

Sometimes you make history, sometimes history makes you and sometimes, history is just something that happens while you are waiting for a bus.

August 21, 2004. Swimmer Michael Phelps wins his 8th medal of the 2004 Athens Olympic Games. The Cubs lose a heartbreaker in Houston as LaTroy Hawkins blows the save in the bottom of the ninth. He gives up a single to pinch hitter Jason Lane after intentionally walking pinch hitter Mike Lamb.

August 22, 1992. Hurricane Andrew devastates the Bahamas on its way to South Florida. The storm eventually kills 26 people and causes $35 billion in damage. The Cubs couldn’t be further away from the storm. They are in Los Angeles beating the Dodgers in the ninth inning on a single by former Dodger Jose Viscaino.

August 23, 2000. The finale of the first season of “Survivor” draws a huge audience for CBS. The Cubs are in Houston playing at what is still known as Enron Field. They easily beat the Astros 15-5 behind Joe Girardi’s 4 for 5 day at the plate.

August 24, 1974. The worst song to ever hit #1 in this nation, “(You’re) Having My Baby” by Paul Anka, hits the top of the charts. The Cubs are in San Francisco beating the Giants 2-1. Steve Stone is given a 2-run lead in the top of the first and hangs on to win the game. Andre Thornton gets the game-winning RBI.

August 25, 1973. Bobby Darin performs his final concert at the Las Vegas Hilton. He will die in December during open heart surgery at the age of 37. The Cubs are in Houston getting a rare win in the Astrodome, 4-3, thanks to a clutch 10th inning single by catcher Randy Hundley.

August 26, 1968. The Democratic National Convention opens in Chicago. Vietnam protestors flood the city. The Cubs are safely out of town, losing 3-0. Gaylord Perry tosses a one-hitter. Glenn Beckert gets the only hit, a solid single to center in the 7th inning.

August 27, 1871. Future award-winning novelist Theodore Dreiser is born in Terre Haute Indiana. It’s the first season of the Cubs franchise (then known as the White Stockings), and they are in New York to face the Mutuals at Union Grounds. None of the players on this 1871 roster will still be with the club when the National League is founded in 1876.

One Response to “Historical Events (August 21–August 27): Where were the Cubs?”