Historical Events (August 14–August 20): Where were the Cubs?

August 14, 1908
In the midst of the Cubs final championship season, a horrible race riot broke out in Springfield Illinois. Before the race riots were over, forty homes were burned to the ground, 24 businesses were destroyed, and seven people were dead: two black people (lynched by the angry mob) and five white people (accidentally killed during the riot).

It was sparked by a charge of rape (a white woman claimed she was raped by a black man). The scene was so ugly that the Governor of Illinois, Charles Dineen, had to call in the state militia to quell the violence. It didn’t work. At it’s peak, the mob was composed of 12,000 people.

107 people were eventually indicted for their roles in this ugly night, but only one was convicted…and he was convicted of stealing a saber from a guard. The woman who made the rape claim that started this whole thing later admitted that she made it up. The rape never occurred.

As a result of this night, a meeting was held in New York City to discuss the national problem of racial intolerance. This incident was one of 89 confirmed lynchings in America in 1908, and reasonable Americans were appalled. That meeting in New York eventually led to the creation of the NAACP.

While baseball wasn’t directly involved in this gruesome event, there was one shameful tie-in. On his way to Chicago to play the Cubs (a few weeks later), New York Giants manager John McGraw stopped in Springfield. He called the lynchings “so called outrages” and the townspeople gave him a section of the rope used in the lynching as a souvenir.

He took it on the road with the Giants as a good luck charm to replace the rabbit’s foot he had been using.

August 14, 2003. A massive black out hits the East Coast, affecting millions of people. The Cubs are not among them. They play a day game at Wrigley Field, and beat the Astros 7-1. Matt Clement gets the win.

August 15, 1969. The Woodstock Music Festival begins at Max Yasgur’s farm in Bethel New York, with Richie Havens taking the stage as the opening act. The first place Cubs still have an 8 ½ game lead, but they lose to the Giants 3-0 at Candlestick Park. Juan Marichal throws a four hitter.

August 16, 1977. Elvis Presley dies in his home at Graceland in Memphis Tennessee at the age of 42. The news comes out during the afternoon, and the Cubs are in the midst of a barn burner at Wrigley Field. (Full story below)

August 17, 1877. Billy the Kid kills his first man, an Arizona blacksmith. The Cubs (then known as the White Stockings) are in Chicago easily beating the St. Louis Brown Stockings 12-6 at 23rd Street Park. George Bradley gets the win. He is the starting pitcher for nine of the eleven games the team plays in August.

August 18, 1991. Soviet hard liners launch a coup against Mikhail Gorbachev, placing him under house arrest. The Cubs beat the Phillies in the bottom of the tenth inning at Wrigley Field thanks to a Shawon Dunston single. Ryne Sandberg scores the winning run.

August 19, 1946. Future president Bill Clinton is born in Hope Arkansas. The Cubs game against the Pittsburgh Pirates at Wrigley Field is rained out.

The Cubs were playing a day game at Wrigley Field against the Pittsburgh Pirates that day. Both teams were chasing the first place Phillies, and both teams still thought they had a chance at the division title.

The Cubs were down 5-4 in the bottom of the ninth with two outs, when Greg Gross doubled to centerfield off Pirates closer Goose Gossage. Centerfielder Omar Moreno bobbled the ball, and when he did, Mick Kelleher raced across the plate with the tying run. It was unearned.

Both teams fought through five full scoreless extra innings. Then, in the bottom of the 15th inning, with dusk approaching, Gene Clines came in to pinch hit for Willie Hernandez. With Bobby Murcer standing on 2B, Clines slapped an infield hit toward Rennie Stennett. Bobby Murcer tried to score all the way from second base on the play, which led to another Pirates error, and the Cubs won the game.

Needless to say, the game wasn’t mentioned on the news that night. There was another story that was getting all the coverage. 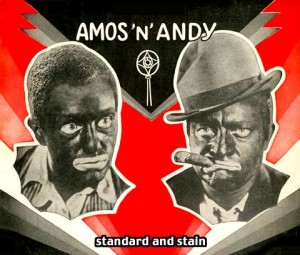 The radio show “The Amos & Andy Show” debuts on the NBC Network. Charles Correll and Freeman Gosden are white men who make a career out of playing caricatures of black men, Amos & Andy. In it’s day it is the biggest radio show in the country.

The show began in 1926 as “Sam and Henry” on WGN radio, which described it as a “colored comedy serial.” Blackface Minstrel shows were the biggest Vaudeville draws, and this was simply a radio version of that already popular comedy form.

By 1927 the radio program had become so popular (inspiring candy bars, short recordings, books and toys) that there was a huge demand well beyond WGN’s listening reach. Chicago’s NBC station, WMAQ, saw the possibility of distributing the show nationwide and Correll & Gosden leaped at their lucrative offer.

The only problem was that WGN refused to let them take the name Sam & Henry along with them. This was solved pretty easily. The show was renamed Amos & Andy, and within a year it was a nationwide six-night a week hit, airing at 7PM Eastern time. It was rebroadcast on the West Coast in the same time slot; the first show to ever rate that kind of importance.

Chicago was suddenly the center of the American media universe–and became the home to dozens of national hit radio shows. None of them, however, were as popular as the number one show in the country; Amos & Andy.

When you hear it now, it’s shocking. But in 1928, radio certainly wasn’t the only part of American society that treated African-Americans as second class citizens. It would be another 19 years before Jackie Robinson would break the color barrier in baseball, and 25 years before the Chicago Cubs allowed a black man to play for them. 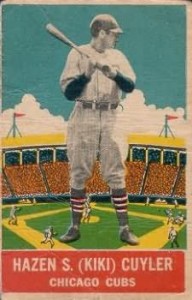 While Amos and Andy were building a powerhouse radio show in Chicago, the Cubs were building a powerhouse lineup. New acquisition KiKi Cuyler, centerfielder Hack Wilson, and Riggs Stephenson formed what is considered by many to be one of the best outfields of all-time. It’s certainly the best the Cubs ever fielded. Stephenson was on-base machine and a great hitter for average. Cuyler was a speedster who stole a league-leading 37 bases in 1928 while leading the team in runs scored. Hack Wilson was pure power. He hit a league-leading 31 homers, knocked in 120, and hit for average too (.313)

Despite the great hitting, fielding, pitching, and the best manager in baseball (Joe McCarthy—who would go on to win eight titles with the Yanks), the Cubs just couldn’t put it all together. They ended the year four games behind the even more impressive St. Louis Cardinals.

The Cubs kept getting better, making the World Series in 1929, but Amos & Andy became a record-breaking phenomenon. At its peak, cities literally came to a halt while the show was being broadcast. Everyone wanted to hear their favorite two characters and their daily misfortunes. While the peak of their popularity came during the thirties, the series remained on the air for nearly 30 years. No other series ever came close to being as popular. 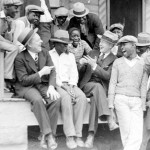 Surprisingly, despite what is highly controversial content to modern day ears, Amos & Andy wasn’t particularly controversial for many years. (Photo: Correll & Gosdin with African-American fans) Defenders claimed it was no different than other ethnic humor, while only a handful of African-American newspapers demanded it be pulled from the network. It wasn’t until the show moved to television in the early 50s, that the controversy became too much for Amos & Andy to continue.

One Response to “Historical Events (August 14–August 20): Where were the Cubs?”