It’s hard to imagine a more heavily hyped television program than Geraldo Rivera’s broadcast on April 21, 1986 from the former Al Capone headquarters (1928-1931) at the Lexington Hotel in Chicago. The hotel was about to be renovated, but not before Geraldo was allowed to investigate…live on the air. There were all sorts of rumors of what might be found in the secret shooting range and secret tunnels (including one hidden behind Capone’s medicine cabinet) that connected to taverns as an escape route in case of a police raid, and had only been recently discovered by the construction company working on the renovation. But the real gem was that unopened vault! And Geraldo was allowed to open it live on the air! There could be no better host for this extravaganza than Rivera, just recently fired by ABC. He knew his theatrics. He put on his safety goggles and fired machine guns in the shooting range, just as Capone and his men might have done. He had IRS agents standing by to claim any riches that may have been found, and medical examiners standing by to recover any bodies. When the vault was finally opened the only things found inside were dirt and several empty bottles. Despite the unbelievably disappointing ending, the special became the most-watched syndicated television special of all-time (it aired on Superstation WGN) with an estimated audience of 30 million. 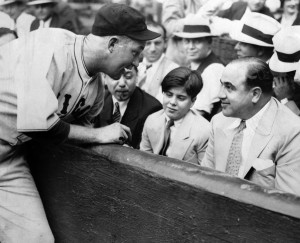 It was the kind of spectacle that would have given the real Al Capone a great big chuckle.Capone loved a good spectacle. He created more than a few, and attended many others in Chicago during his years at the Lexington. He attended the Dempsey/Tunney fight, and he went to all the big baseball games, particularly the popular Cubs/Sox series. One year he was even photographed with Cubs catcher Gabby Hartnett. (Sun Times File Photo) Hartnett wasn’t around to watch Geraldo open the vault in 1986 because he had died fourteen years earlier in Park Ridge.

But it’s a good guess that several members of the 1986 Cubs were watching—-they were in town and didn’t have a game that night. In fact, they didn’t have any night games at Wrigley for two more years, and the game the day before against the Pittsburgh Pirates had been suspended because of darkness. In that game, and the continuation of it, the Cubs set a Major League record with most pitchers used in a game (10). 7 of them were used on April 20th, and another 3 were used on the day it was completed, August 11, 1986.

The game lasted 17 innings and the Pirates won it on a rare error by Cubs centerfielder Bobby Denier, who overran a ball, which allowed Bobby Bonilla to score. The batter who knocked him was Barry Bonds. The ten Cubs pitchers for the game were…Dennis Eckersley, Jay Baller, Matt Keough, George Frazier, Lee Smith, Dick Ruthven, Rick Suttcliffe, Steve Trout, Frank DiPino (the loser), and Dave Gumpert. The Lexington Hotel was demolished less than ten years after Geraldo’s theatrics (1995), and the site remained an empty lot in the South Loop neighborhood of Chicago until the area was revitalized in the early 2000’s. The 31-story Lexington Park Condominiums was completed in Spring 2008, and now stands on the spot that Al Capone…and Geraldo Rivera…made famous.

***
April 17, 1964. Ford unveils the Ford Mustang. Despite four homers from the Cubs, 2 by Williams and one each by Lou Brock and Ron Santo, Richie Allen and the Phillies beat the Cubs 10-8 at Wrigley Field. Former Cub Johnny Klippstein gets the win.

April 19, 1995. The Oklahoma City bombing shocks the world. The Cubs, and the rest of baseball, are on strike. Games would resume a week later.

April 20, 1898. President McKinley asks Congress to declare war on Spain. The Cubs (known then as the Orphans) lose 7-6 to Louisville.

April 21, 1918. The Red Baron is killed in action in World War 1. The Cubs win 9-1 in Cincinnati. Cubs winning pitcher Grover Cleveland Alexander will be sent to the war in a few weeks.

April 22, 1970. The first Earth Day is celebrated. Fergie Jenkins and the Cubs beat the Cardinals and Mike Torrez 7-5. Don Kessinger hits his only homer of the year.

April 23, 1967. A Soviet Cosmonaut is killed when his parachute fails to deploy during landing. Fergie Jenkins and the Cubs beat the Pirates 7-3 at Wrigley Field in front of 6734 fans.