Today is Kasimir Pulaski day, which is a big deal to Chicago’s large Polish population. There have been exactly five players in big league history who were born in Poland, and one of them played for the Cubs.

His EVERY CUB EVER entry is listed below… 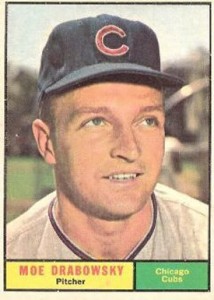 ~Moe Drabowsky 1935 (Cubs 1956-1960)
Moe was born in Poland, and was a hot young gun pitcher for the Cubs in the late 50s. His best season with the Cubs was probably 1957, when he won 13 games as a 22-year-old for a very bad Cubs team. He never lived up to that in the proceeding years, so the Cubs eventually gave up on him. He later pitched for the Braves, Athletics, and Reds in the early 60s, but really found a home in Baltimore. Moe became a key part of the bullpen for two World Series champions Orioles teams in 1966 and 1970. He beat Don Drysdale to win Game 1 of the 1966 World Series. Moe ended up pitching 17 years in the big leagues. (Photo: Topps 1961 Baseball Card)

The other 4 Polish-born players were Elmo Valo (who played 20 seasons in the big leagues, mostly with the A’s), Nap Kloza who played for the Browns, and Henry Peploski and Johnny Reder, who both played one season in Boston.