It’s a stretch, but it is pronounced the same. The perfect player to profile on the first day of Faul… 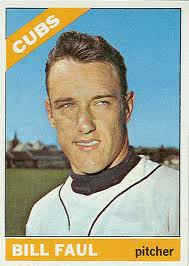 ~Bill Faul 1940 (Cubs 1965-1966)
Some players are known as characters. Some are known as eccentrics. Still others seem to have come from another planet. Bill Faul was one of those guys…and he wasn’t even a lefty…or a Californian. Faul pitched for the Cubs in 1965 and 1966. It’s safe to say that he had a quirk or two. For instance…

*He hypnotized himself before games and talked to his arm. Opposing players would make fun of him by swinging watches and saying ‘tick tock tick tock’ while he was pitching.

*He used to rip the heads off parakeets with his teeth (according to Bill Lee).

*He swallowed live toads, claiming they put “extra hop” on his fastballs.

*He liked to hold guys off the third or fourth floor hotel balcony by their ankles…upside down.

Former Detroit Tigers manager Chuck Dressen once said: “You watch him for a while, watch how he acts, talk to him, spend some time with him, and you figure either he’s the dumbest guy in the world or the smartest one you’ve ever met.” As wild and unpredictable as Faul was, he was cool as a cucumber on the field. He had to be awakened in the clubhouse only thirty minutes before his first major league start. Faul shook out the cobwebs, grabbed the ball, warmed up, and pitched a three-hitter. Faul always seemed to be in the middle of a lot of excitement. He was one of only a handful of pitchers to be involved in fielding a triple play, and one of only two major league pitchers in history to have three triple plays in one season while he was on the mound. He claimed the secret to his success was his hypnosis therapy, his background as a karate instructor in the Air Force (his hands and feet were both registered as dangerous weapons), and his spiritual consciousness (he was a Doctor of Divinity for the Universal Life Church). Unfortunately for Faul, the league figured him out in 1966. When his ERA climbed over 5, he was sent down to the minors and never returned to the Cubs. He kicked around the minor leagues for a few seasons before turning up for a cup of coffee with the Giants in 1970. Bill Faul died in 2002, at the age of 62. (Photo: Topps 1965 Baseball Card)