This was originally written and posted on July 26, 2009 on nwi.com, my Father Knows Nothing blog. 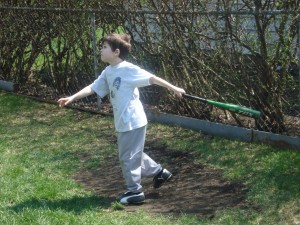 Sean woke me up at 7 in the morning. He was already wearing his Cubs hat, his Cubs shirt, and his baseball mitt.

I love the boy’s enthusiasm, although I would have loved it just as much an hour later. He couldn’t help himself. He had been waiting for this day all summer. I take each of the boys to one Cubs game every year, a rare day of one-on-one time with Dad, and this was Sean’s day. (Johnny’s day was earlier this summer, Tommy’s comes in a few weeks.)

We walked into Wrigley Field just as the lineups were being announced, and discovered our first taste of unexpected good luck. It was “Build a Bear” day and they were handing out Cubs teddy bears to the first few thousand kids that arrived. Sean literally got the last one.

“I’m calling it Babe Ruth, Dad,” he said, “Because it’s the greatest bear ever.”

Now, I realize that traveling with a really cute kid (my totally biased opinion) has it’s perks, but today we were in for way more than our share. The second stroke of luck occurred as I was buying our programs. A lady came up to me and asked a strange question.

“Do you have good seats for the game?”

“Um, I guess so,” I said, and was trying to explain where our seats were in the second section behind first base, when she interrupted me.

“Would you like fourth row seats right behind the Cubs dugout?”

“Yes. My husband and I have two extra seats because our friends couldn’t make it. I was hoping to give it to someone here with a youngster. We’ll be sitting right next to you.”

Sean’s eyes almost bugged out of his head.

So, instead of sitting in my usual seats in section 228, we sat in section 15, exactly four rows behind the Cubs dugout. The players in the on-deck circle were so close, it felt like you could reach out and touch them.

“There’s Ryan Theriot!” Sean screamed. He identified all the other players as they came out onto the on-deck circle too, which entertained the people around us to no end. It was obvious this little six year old wasn’t just coming to a baseball game. He was a real fan.

In the fourth inning a Reds player struck out on a pitch in the dirt to end the inning. Cubs catcher Koyie Hill did what he always does when an inning ends with a strikeout. He tossed the ball into the stands behind the dugout to one of the young fans. A teenager in the second row caught it.

He presented the ball to Sean. “I want you to have it,” he said.

Sean’s eyes almost bugged out of his head again.

“Dad, look! It has some real Wrigley Field dirt on it.”

He tossed the ball into his mitt a few times to hear it pop. Even I was jealous now. I’ve been going to Wrigley Field for 41 years and I’ve never gotten a single ball. When I told Sean that, he beamed.

The people sitting next to us, the ones that gave us the seats, turned out to be from Lansing, Michigan. We had a wonderful time hanging out with them. They took pictures of Sean and I together. They watched our stuff for us as we walked around the ballpark taking in the sights between innings. And while we were sitting in our seats, we had great conversations about kids (they have two about the ages of my older two), baseball, and life.

Throughout it all, Sean kept piling on the goodies. In addition to his free teddy bear and ball, he was also given a free coloring book by an usher as we walked around. I also bought him a Cubs bear claw and a Cubs bat. Each boy gets $20 to spend as they wish. Sean didn’t want any food or drinks–he wanted the merchandise. He couldn’t even carry all of his booty.

In the bottom of the sixth inning the Cubs pitcher (Randy Wells) was standing in the on-deck circle when Lou Piniella called him back for a pinch hitter. He took off his batting gloves and tossed them into the stands. The teenager that had given up his ball to Sean, caught the gloves. A perfect moment of karma.

And on top of it all, the Cubs won!

When the last out was recorded, Sean looked at me and said: “Dad, this is the best day of my life.”

The couple that gave us the tickets heard him say it, and they smiled. He even thanked them (without parental prompting), which made me very proud of my little boy.

I got their address and I plan to send them free copies of my books as an additional thank you for all they did for us that day. I know it will never repay them fully for what they did, but I need to do something. How do you repay someone for giving your son the best day of his life?

One Response to “A Perfect Day”