Home » Wrigley Field Memories » A Day At The Ballpark

A Day At The Ballpark

This was originally posted at nwi.com on June 21st, 2009 on my “Father Knows Nothing” blog… 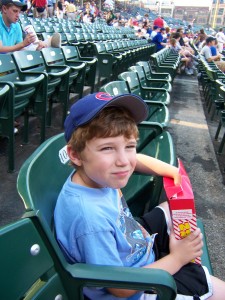 Johnny was sad the moment he woke up Friday morning. He heard the pitter patter of the rain against the window, and he knew what that meant.

“We’re getting rained out today, Dad.”

“Think positive,” I said. “Let’s listen to the weather forecast.”

I take each of the boys to one Cubs game every year. It’s a special father-son day, rare one-on-one time, and Johnny was watching it pass before his eyes with every raindrop. It was nine o’clock in the morning and the skies were as black as night. This was no ordinary drizzle. This was a storm. Before we got to the radio, we heard the thunder.

It was an adventure alright. On the way to the ballpark we were diverted in three different places because the roads were flooded. We had to drive about five miles an hour because we couldn’t see more than twenty feet in front of us. One of the viaducts on the highway was downright scary because cars were going way too fast through the increasingly deep puddles of water.

The second we got out of the car a few blocks away from Wrigley (one of the advantages of arriving in a rainstorm–good parking was available), the rain came down as hard as I’ve ever seen it rain. It was the kind of rain with great big raindrops that drench you from head to toe in five seconds. Our umbrella was destroyed by a big gust of wind on Clark Street, and when we walked into my favorite restaurant (our regular pre-Cubs ritual), we were literally dripping on the floor. The waitress put a towel on our seats so we didn’t ruin the furniture.

Unfortunately they sat us directly under a vent. The air conditioning was blasting and within a few moments, Johnny was freezing cold. He looked miserable.

“Remember, buddy,” I said. “This is an adventure.”

It was still raining when we walked into the ballpark, but our seats were protected by the overhang of the upper deck. Finally, we had a chance to dry off a little bit. I always tell the boys they can have one snack and a souvenir of some kind, and Johnny chose a big box of popcorn and one of those foam bear claws. Wearing the bear claw transformed his attitude instantly. He started smiling.

We got a scorecard too, and during the time we waited for the rain to stop, I taught him how to keep score. I was pretty sure that we were going to be rained out, but I also knew that if we didn’t stick it out until they officially canceled it, we wouldn’t get a rain check for another game. I was ready to stick it out as long as Johnny could stand it.

But then something amazing happened.

The skies opened up, the sun came out, and the game began. The Cubs fell behind 7-0 and Johnny didn’t seem to mind at all. He was keeping score, eating his popcorn, and talking non-stop. I call Johnny my philosopher king, because he always wows me with his observations about life. During a nine-inning baseball game there’s a lot of time to talk about life (and baseball).

Here are a few of Johnny’s gems from Friday…

*”You know Dad, we shouldn’t have fun every day this summer, because if we do the time will go too fast, and then the summer will be over before you know it. Sometimes you just have to slow down and be a little unhappy if you want to make the good times last.”

*”I bet Mark DeRosa feels a little weird playing for the other team here. I bet he wishes he was still on the Cubs. I can see it in his body language.”

*”You know what I love most about going to the game? I don’t have to share you with anyone, and you can hear what I’m saying because Sean isn’t talking all the time.”

*”When you’re the middle kid, you don’t get to do anything first like the oldest kid, and everyone always sticks up for the baby. It’s probably the toughest job in the family.”

*”I hope the Cubs never come back in this game. Yup, I’m rooting for the Indians. (Whispering to me) “I don’t really mean that Dad, I’m just using reverse psychology on God.”

I was loving every second of my day at the ballpark with my little philosopher. As a special bonus, the reverse psychology worked. The Cubs made an incredible comeback and won the game 8-7. It was one of the best games I’ve ever seen in my 40-plus years of going to Wrigley.

Johnny had a huge smile on his face when we came home that day. He proclaimed it to be one of the best days of his life to anyone who would listen.

But I’ll tell you a little secret.

His dad loved it even more.