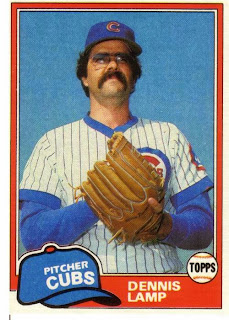 ~Dennis Lamp 1952– (Cubs 1977-1981)
His major league debut came late in the 1977 season, when he was called up to help out the fading Cubs team that had started so strong that season. Judging by his 6.30 ERA, he wasn’t quite ready for prime time. Lamp was a member of the starting rotation the next few years, and even won 11 games in 1979 (a year in which he also gave up Lou Brock’s 3000th hit), but sadly, it wasn’t until he was traded to the White Sox in 1981 that somebody figured out his rubber arm belonged in the bullpen. He may have given up Cal Ripken Jr.’s first career hit pitching in that role, but that’s also where he made his mark in the big leagues. He was a key member of the 1983 White Sox playoff team, and later pitched in the playoffs for the Blue Jays and the Red Sox. (Photo: 1980 Topps Baseball Card)

~Chris Volstad 1986– (Cubs 2012)
Volstad was acquired in exchange for clubhouse cancer Carlos Zambrano. The new regime led by Theo Epstein didn’t want Zambrano’s attitude (and contract) around, so it seemed like a good deal at the time. Volstad had been a first round draft choice and 12-game winner for the Marlins. But he was legendarily awful with the Cubs. His record (3-12) and ERA (6.31) don’t even tell the story of how bad he was for the Cubs. He also allowed sixteen homers (in just over a hundred innings), walked almost as many as he struck out, and gave up 137 hits. After the season the Cubs let him go.

~Willie Greene 1971– (Cubs 2000)
Greene was a former first round pick. He was signed as a free agent after having a couple of pretty good power years as the third baseman for the Reds. Willie’s issue was his inability to make contact. He did slug ten homers for the 2000 Cubs, but he also hit only .201. It was the last stop of his big league career.

~Tony Fossas 1957– (Cubs 1998)
Fossas was a journeyman reliever (known as “The Mechanic”) who was 31 years old when he made it up the big leagues. He pitched for the Rangers, Brewers, Cardinals, and Mariners before coming to fix the Cubs bullpen in the summer of 1998. In four innings he walked six men, and gave up eight hits and four runs. He wasn’t allowed to work in the bullpen anymore after that. The Cubs moved on to a different mechanic.

~Mack Stewart 1914–1960 (Cubs 1944-1945)
Mack Stewart got into eight games in the summer of 1944, and pitched fairly well. He also started the 1945 season with the Cubs, but wasn’t very effective, so they sent him down to their single-A team in Nashville at the end of June. He had a couple more solid seasons in Double-A, but never made it back up to the big leagues. Stewart was already in his 30s when the season began and more than likely never would have made it on the Cubs if their team hadn’t been so badly depleted during the war.

~Joe Kelly 1886–1977 (Cubs 1916)
Kelly was a backup outfielder for the Cubs during their first year in Wrigley Field. He played all three outfield positions and hit .254. He had good speed, but no power. His career totals tell the story: 66 stolen bases, 6 homers. Kelly also played for the Boston Braves and Pittsburgh Pirates, but the bulk of his career was spent in the minors. He played an incredible 23 seasons in the minor leagues.

~Gonzalez Germen 1987– (Cubs 2015)
The Cubs picked up Germen when the Rangers waived him in January of 2015. They saw the Dominican reliever as a promising prospect, but after getting knocked around a few times, he was designated for assignment in early May. Germen had previously had a cup of coffee with the Mets in 2013 and 2014 and threw smoke. Early season injuries to Cubs relievers brought him to the big leagues with the Cubs in April. He was released in July and finished the season with the Colorado Rockies. 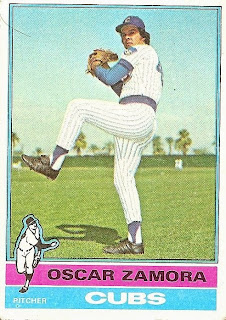 ~Oscar Zamora 1944– (Cubs 1974-1976)
Zamora pitched a perfect game in the minors on the same day that Milt Pappas almost pitched one for the big league club (9/2/72). Oscar became one of the Cubs closers in the mid-70s before the arrival of Bruce Sutter. He saved ten games in consecutive seasons (1974-1975), but the first year went considerably better than the second. In 1975, Zamora was hit hard. The Cuban reliever gave up 17 homers in only 71 innings. When the next season went similarly, the Cubs sent him back to the minors. (Photo: 1976 Topps Baseball Card)