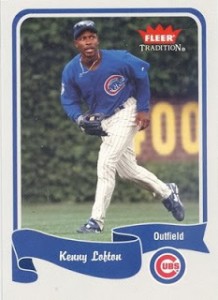 ~Kenny Lofton 1967– (Cubs 2003)
Lofton is a local kid, born in East Chicago. He wasn’t on the Cubs for long, just half a season (2003), but he might have been the key acquisition that propelled the Cubs into the NLCS. Lofton was the leadoff man and center fielder for the Cubs after Corey Patterson was hurt, and gave them something they haven’t had before or since: a true leadoff man with a great on-base percentage, the ability to steal a base, score some runs, and disrupt a pitcher’s game plan. In the NLDS against the Braves, Lofton stole three bases against his former team. In the NLCS against the Marlins, he certainly did his part too, hitting .323 in the seven game series. Unfortunately, the Cubs opted not to re-sign him before the 2004 season. Management reasoned that Lofton was nearing the end of his career, but while the Cubs were watching the playoffs at home the next few seasons, Lofton was playing in the postseason three of the next four years with the Yankees, Dodgers, and Indians. (Photo: Fleer 2004 Baseball Card)