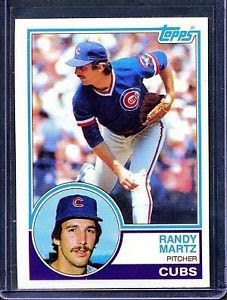 ~Randy Martz 1956– (Cubs 1980-1982)
Martz was a first round draft choice of the Cubs (12th overall) after he was the College Baseball MVP at the University of South Carolina. He had a few unimpressive seasons with some very bad Cubs teams before being sent to the White Sox as part of the trade that brought Steve Trout to the Cubs. (Photo: Topps 1983 Baseball Card)

~Mike Difelice 1969– (Cubs 2004)
Difelice was a well-traveled backup catcher, logging big league time with the Cardinals, Rays, Diamondbacks, Royals, Tigers, and Mets in addition to the Cubs. He was with the Cubs for the shortest amount of time. He went 0 for 3 in 2004, and caught parts of four games in September of that season, the month of their infamous collapse. After his playing career, he became a minor league manager.

~Craig Kimbrell 1988– (Cubs 2019-present)
When the seven-time All-Star closer was signed as a free agent in early June of 2019, Kimbrell appeared to be the final piece of the puzzle to bring the Cubs back to the World Series. Cubs fans realized he hadn’t pitched all season (no one had signed him in the off-season), and that he had a bit of a shaky ending with the Red Sox, but he was still considered an elite closer–and the Cubs bullpen was considered their biggest weakness. After a short stint to get into game shape, he made his first appearance a few weeks later. To say it didn’t go well is to understate the case. He saved 13 games, but his ERA was over 6 after previously never having one over 3. And he gave up nine homers; all of them gruesome bone-crushing body blows. That was in a measly 23 appearances. His nickname is Dirty Craig.

~Mike Maksudian 1966– (Cubs 1994)
Mike was another backup catcher who spent some time in a Cubs uniform. When the Cubs got him in 1994, he was already known as the catcher who ate insects in the Blue Jays bullpen. He actually got the most at-bats of his career with Cubs. He batted 26 times, and got seven hits, including two doubles. He also walked 10 times, which means his OBP was .472. In his final at-bat he pinch hit for Dave Otto and grounded out to the pitcher. The next day, baseball players went on strike, and Maksudian never returned to the bigs. He was 28.

~Tom Grant 1957– (Cubs 1983)
Grant spent the entirety of his very brief big league career with the Cubs. The outfielder batted 20 times and got 3 hits. One of them was a double. In the last game of the 1983 season, in his last at-bat in the big leagues, Grant knocked in both of his career RBI. The Cubs still lost 9-6.

~Bobby Smith 1934–2015 (Cubs 1962)
There were three Bob Smiths in Cubs history. This Bob Smith was an outfielder who spent a few weeks with the very bad 1962 Chicago Cubs. How bad were they? The expansion Houston Colt 45s had a better record. The only team that was worse was the worst team in big league history — the 1962 New York Mets. Unfortunately for Bobby Smith, he also played for that team.