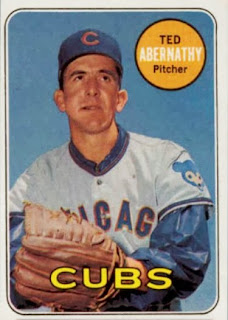 ~Ted Abernathy 1933–2004 (Cubs 1965-1966, 1969-1970)
Abernathy’s delivery was memorable–he was a submariner who nearly hit the ground with his arm on every pitch. The reliever pitched for seven teams during his fourteen year career, but probably had his best season in 1965 with the Cubs. That year he led the league in saves with 31. (He also led the league in saves with the 1967 Cincinnati Reds). By the time he returned to the Cubs in 1969, he was no longer a closer, but he remained an important part of the Cubs bullpen. Ted was traded to the Cardinals in May of 1970 and remained in the big leagues until 1972. (Photo: Topps 1969 Baseball Card)

~Hal Mauck 1869–1921 (Colts 1893)
Hal was a Princeton boy…Princeton, Indiana. The right hander was a starting pitcher for the Cubs (then known as the Colts) at West Side Grounds in 1893. He was 8-10 in 18 starts, but what might have been most remarkable about his season was his strikeout total. He pitched 143 innings that year and struck out only 23 batters. After he was released by Chicago he pitched in the minor leagues until 1900. One season in the minors, he struck out only ten batters.

~Bill Sweeney 1886–1948 (Cubs 1907, 1914)
Sweeney played the first season and the last season of his big league career with the Cubs, and his timing couldn’t have been worse. When he came to the big leagues he was part of the best team in baseball. The Cubs were on their way to their first World Series title. Sweeney filled in for Joe Tinker when the shortstop was hurt, but he didn’t exactly take advantage of the opportunity. He played in three games and made six errors. He also hit .100. So the Cubs traded him to Boston. He went from the best team in baseball to the worst team. Boston finished an average of 50 games a season behind the Cubs over the next few years. But Sweeney played well for Boston and claimed their starting job at second base. By 1912 he was one of the best players in their lineup. Sweeney hit .344 and drove in a hundred runs. But just as Boston was getting good, he was traded back to the Cubs for Johnny Evers in 1914. Evers led the Braves to the title, while Sweeney played for a lousy Cubs team. He retired after the season at the age of 29, and moved back to Boston, where he ran a successful insurance company.

~Terry Adams 1973– (Cubs 1995-1999)
Terry was a hard throwing right handed reliever for the Cubs in the late 90s. They thought they could make a closer out of him, but it didn’t work out. He did register 18 saves in 1997, but his ERA was 4.62, and his WHIP (walks & hits per inning pitched) was an incredibly bad 1.77. Terry was traded to the Dodgers in December of 1999 for Eric Young and Ismael Valdez. A bit of Terry Adams trivia: He is one of only 13 players in big league history to have played more than 500 games and registered more walks than hits (as a batter). He had four career hits and seven career walks.

~Jake Arrieta 1986– (Cubs 2013-2017)
Arrietta was a member of Team USA in 2006 and helped them win the World University Baseball Championship before being drafted by the Orioles. He had trouble with his control and gave up a few too many long balls during his time in Baltimore, and was traded to the Cubs in 2013 along with Pedro Strop as part of the Scott Feldman trade. That turned out to be one of the best trades in Cubs history. Jake had a breakthrough season for the Cubs in 2014, winning 10 games and posting an ERA of 2.53. In 2015, he put the Cubs on his shoulders and took them all the way to the NLCS, winning 22 games, posting an ERA of 1.77, striking out 236 batters, throwing a no-hitter, and winning two playoff games (Wildcard and NLDS), and winning the Cy Young Award. In their World Series season of 2016, he wasn’t quite as sharp, but he did win two crucial World Series games against the Indians. In 2017, Arrieta was once again the strongest starter in the playoffs for the Cubs after leading the team with 14 wins during the regular season. He became a free agent after the season, and signed with the Phillies.

~Leonys Martin 1988– (Cubs 2017)
Projected to be a big star with Texas early in his career, Martin never quite lived up to the hype. The Cubs acquired the Cuban outfielder from the Mariners during the stretch run of the 2017 season for his defense and baserunning ability. He did manage to make the postseason roster in that capacity, and appeared in five playoff games. He was granted free agency after the season ended.