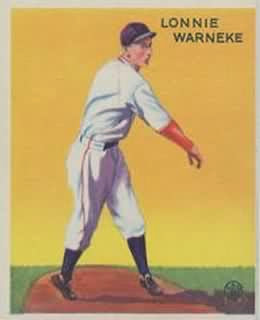 ~Lon Warneke 1909–1976 (Cubs 1930-1936, 1942-1945)
His nickname, “The Arkansas Hummingbird”, was given to him by sportswriter Roy Stockton because of his “sizzling fast and darting form of delivery.” And, of course, because he hailed from Arkansas. He wasn’t just the owner of a great nickname, he was also a great pitcher–the best pitcher on the Cubs from 1930-1936, especially during the ’32 and ’35 pennant seasons. Unfortunately, he was traded for first baseman Ripper Collins in 1937—even though the Cubs already had star 1B Phil Cavaretta on the roster. That will go down as one of their worst trades ever. Collins played two seasons for the Cubs, but Warneke averaged 15 wins a season over the next five years with the hated St. Louis Cardinals, and appeared in two all-star games. The Arkansas Hummingbird came back to the Cubs during the war (1942-1943, 1945), but wasn’t the same pitcher anymore. After his playing career ended, Lon Warneke became a Major League umpire. (Photo: 1933 Goudey Baseball Card)

~Robel Garcia 1993– (Cubs 2019)
Robel has one of the most unlikely backstories of anyone in baseball. After being released by the Indians farm system at the tender age of 21, the Dominican infielder decided he was too young to retire. He ended up playing professionally in a very unlikely location: Italy. . Yet somehow, while playing for the Italian national team, Robel was seen by a Cubs scout, who thought he looked like a player. The Cubs took a flier on Garcia and he excelled in the minors. Five years after getting cut by the Indians, Robel made it to the big leagues at the age of 26. He had his moments. Robel showed good pop (5 homers in only 80 at bats), and had a knack for getting big hits, but he also had a big hole in his swing, and his defense was below average (4 errors in 14 games at 2B).

~Shawn Boskie 1967-– (Cubs 1990-1994)
Boskie was a first round draft pick by the Cubs (10th overall) and pitched in the big leagues for nine years, but never really reached the stardom that was predicted for him. He showed flashes, but didn’t really contribute significantly out of the rotation or the bullpen. His lifetime ERA was over five.

~Julio Zuleta 1975– (Cubs 2000-2001)
The Panamanian slugger had obvious power, but he couldn’t claim a starting spot with the Cubs. He was big (6’5″) and bright (he could speak five languages: Spanish, Portuguese, French, English and Japanese), but he isn’t really remembered for either thing in Chicago. He’s remembered for the funny spells he would cast on the bats in the dugout, trying to coax more hits out of them. Zuleta later starred in Japan.

~Ryan Kalish 1988– (Cubs 2014, 2016)
Kalish came up through the Red Sox system, and was signed as a free agent by his former bosses Theo Epstein and Jed Hoyer. With the Cubs he showed great hustle and determination, but he hit only .248 in 57 games. He signed with the Blue Jays after the season. The Cubs brought him back in 2016 and he played with the big league club for about a week in May. He had a few big hits, but the stacked roster didn’t have a permanent place for Kalish. He was granted his free agency after the season again.

~John Records Landecker 1947– (Cubs singer since 1993)
John Records Landecker is a radio legend (WLS, WJMK, WCKG, etc) in Chicago. During the 1990s he led the band “Landecker & The Legends” and they did several songs about the Cubs. Listen to them below…
Cubs 94: Hats Off To Harry: SOSA: Baseball Striking Again: