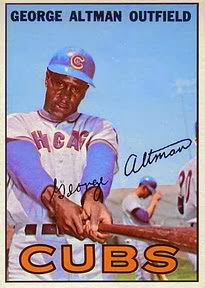 ~George Altman 1933– (Cubs 1959-1962, 1965-1967)
Big George, as he was known, had a few great seasons in the big leagues, and he was wearing a Chicago Cubs uniform when he did it. He joined Chicago after completing his military service and had an immediate impact. His two best seasons came during the ridiculous College of Coaches era, in 1961 and 1962. He clubbed 27 homers in ’61 and was named to the All-Star team. He followed that up with another All-Star season in 1962, hitting 22 home runs. The Cardinals thought they were getting a star when they traded for Big George in 1963, but this trade worked out better for the Cubs. The pitchers the Cubs got in return (Larry Jackson and Lindy McDaniel) had tremendous seasons in Chicago, while George fizzled in St. Louis. He finished up his career with the Cubs, but by then he was mainly a backup. (Photo: 1967 Topps Baseball Card)

~Emil Geiss 1867–1911 (White Stockings 1887)
Emil was a 20-year-old Chicago boy who got exactly one big league start, and that came for his beloved hometown Cubs (then known as the White Stockings) on May 18, 1887. He took the mound against the Washington Nationals (that’s what they were called in the 1880s) in Washington. Young Emil went the distance, but he gave up 17 hits and 11 runs, and the White Stockings lost the game 11-4. Emil knocked around the minors a few years after that, but never got another shot at the bigtime. He passed away in Chicago in 1911 at the way too young age of 44.

~Johnny Butler 1893–1967 (Cubs 1928)
They called him Trolley Line, and Johnny more than likely acquired his nickname thanks to the town of Butler, Pennsylvania, which featured a well-known Trolley line (the Butler Short Line). Butler didn’t have much power (3 career home runs), and he didn’t hit that well (career .252 hitter), but he was a pretty good glove man in the infield, and he was versatile. Trolley Line Butler played 3B/SS for 1928 Cubs. He stayed in the big leagues for four seasons–two years with Brooklyn before joining the Cubs, and one season with the Cardinals in 1929. By the turn of the decade, the Trolley Line was shut down.

~Clyde Shoun 1912–1968 (Cubs 1935-1937)
Clyde Shoun was called “Hardrock” because he threw one—a great fastball. Hardrock was a wild pitcher that was knocked around a bit when he was with the Cubs for parts of 1935 and 1936. He became a part of the rotation in 1937, and the league knocked him around even more. His ERA that season was 5.61. The Cubs didn’t think they were losing too much when they traded him to the Cardinals as part of the famous Dizzy Dean trade, but they were wrong. The Cardinals turned him into a reliever, and Clyde led the league in appearances in 1939 and 1940, and tied for the league lead in saves. He even won nine more games for the Cardinals than Dean won for the Cubs. Hardrock had two more good seasons as a starter with Cincinnati (14 wins and 13 wins) during the war. On May 15, 1944 he pitched a no-hitter against the Boston Braves. His only blemish in that game was a walk to the opposing pitcher Jim Tobin.

~Jim Willis 1927-– (Cubs 1953-1954)
Willis spent his entire big league career in a Cubs uniform, but it didn’t last long. The reliever had trouble with his command. In his final season with the Cubs he pitched twenty-three innings and walked eighteen men. Jim pitched in the minors until 1957 before hanging up his spikes at the age of 30.

~Manny Alexander 1971– (Cubs 1997-1999)
Manny was a versatile backup infielder with the Cubs during his three years in Chicago, but he didn’t hit well. The Cubs traded him to the Boston Red Sox for Damon Buford before the 2000 season. Despite a twelve year big league career, Manny is mainly remembered for his connection to the steroids age. The year after he left the Cubs, police discovered a bottle of anabolic steroids and two hypodermic needles in a Mercedes-Benz owned by Alexander. Massachusetts State Police considered filing steroid possession charges against him, but didn’t because they couldn’t prove the steroids belonged to Manny. Because of that incident, Alexander’s name appeared in the Mitchell Report in 2007.