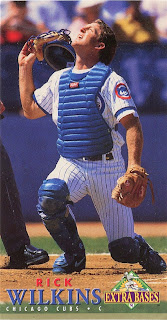 ~Rick Wilkins 1967– (Cubs 1991-1995)
Wilkins came out of nowhere to hit 30 homers for the Cubs in 1993. He had previously never hit more than 17 homers in a season, and that was in the low minor leagues. Unfortunately for the Cubs, the following season the prince turned back into a frog. He never again approached those heights, and was traded to the Astros in 1995 for future slugger Luis Gonzalez and fellow catcher Scott Servais. (Photo: 1994 Fleer Extra Bases Baseball Card)

~Scott Servais 1967– (Cubs 1995-1998)
Born on the same day as the man he was traded for (Rick Wilkins), Servais immediately became the starting catcher for the Cubs. He had several good seasons as the Cubs backstop, especially 1995 and 1996 when he had double-digit home run totals. His last year with the Cubs ended with his only career playoff appearance. He went 2 for 3 in the 1998 NLDS against Atlanta. Servais signed with the Giants the following season, and later played with the Rockies and Astros. After his playing career, he took front office positions with the Texas Rangers and the Los Angeles Angels.

~Arnold Early 1933–1999 (Cubs 1966)
Early was a lefty reliever for the Cubs in 1966. He appeared in 223 games in his big league career, and all but ten of those were from the bullpen. With the Cubs, Early posted a 3.57 ERA in 13 appearances. He previously pitched for the Red Sox, and finished his career with the Astros.

~Lee Magee 1889–1966 (Cubs 1919)
His real name was Leo Hoernschemeyer. Magee was the first player in big league history to get five hits in a row. He came to the Cubs after stints with St. Louis (Cardinals and Browns), Brooklyn, New York (Yankees), and Cincinnati. He was also a player/manager in the Federal League. The Cubs were his last stop. He hit .292 and stole 14 bases, while playing every position except for pitcher, catcher, and first base. Lee was quietly banned for life in 1920 by Commissioner Landis for allegedly fixing games.

~Orlie Weaver 1886–1970 (Cubs 1910-1911)
Orlie was brought in during the final month of the Cubs 1910 pennant-winning season, and pitched in seven games. The following season he stuck with the big club, and was pitching quite well (2.06 ERA) when he was traded to Boston (along with Johnny Kling) in exchange for a handful of players including Peaches Graham. It all fell apart for Orlie with the Boston Braves. He lost twelve of his fifteen decisions and never pitched in the big leagues again.

~Chang-Yong Lim 1976– (Cubs 2013)
Lim had a brief stint in the Cubs bullpen during September of 2013. He pitched well enough, but after the season he returned to his native South Korea.