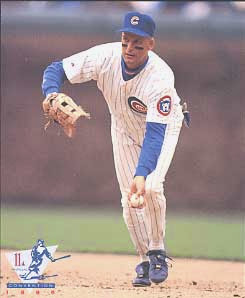 ~Mark Grace 1964– (Cubs 1988-2000)
They called him Amazing Grace, after the song, and because of his amazing glove work around first base. Mark Grace anchored first for the Cubs for more than a decade and became one of Wrigley Field’s fan favorites. He won four Gold Gloves, hit .300 nine times, led the league in doubles and at-bats per strikeout, and had more hits than any other player in the 1990s. He also saved his best for the most important moments. In the 1989 NLCS vs. the Giants, Grace was on fire, hitting .647 and driving in eight runs. He also became a World Series champion…although sadly, after he left the Cubs. In the 2001 World Series, Grace hit a home run for the Diamondbacks, and later had a key at-bat in the ninth inning of the clinching game 7 in Arizona. After his playing career ended, he made a seamless transition to the broadcasting business. Unfortunately for Mark, that career ended when he was arrested and convicted of driving under the influence of alcohol.

~Chris Speier 1950– (Cubs 1985-1986)
Long before he was arrested for DUI as a coach for the 2006 Cubs, Chris Speier was a very respectable backup infielder for the 1985 and 1986 Cubs. He backed up Sandberg at second, Dunston at shortstop, and Ron Cey at third, and in 1986 hit .284 for the year, the best he ever hit in a season during his 19-year major league career. He was a three-time All-Star shortstop early in his career with the San Francisco Giants.

~Ron Mahay 1971– (Cubs 2001-2002)
The journeyman reliever pitched 14 seasons in the big leagues, including two with the Cubs. He pitched fairly well out of the bullpen in 2001, but then followed that up with a terrible 2002. Mahay also pitched for the Red Sox, A’s, Marlins, Rangers, Braves, Royals, and Twins.

~Matt Karchner 1967– (Cubs 1998-2000)
Acquired in one of those classic terrible Cubs trades (for farmhand Jon Garland), Karchner was brought in to help out the struggling bullpen in 1998. The former White Sox closer was lit up the rest of that year, and hurt his arm the following season. Meanwhile, Jon Garland went on to win more than 10 games six years in a row (including two 18-win seasons) for the White Sox. Among Garland’s exploits, starting Game 3 of the 2005 World Series (an eventual win for the Sox).

~Hal Breeden 1944– (Cubs 1971)
Hal got his start with the Cubs in 1971 — the same year his brother Danny was on the Cubs roster. Breeden was mainly a first baseman, and got very few chances in Chicago. He later played more extensively for the Montreal Expos.