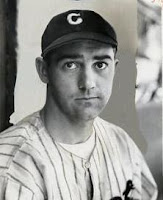 ~Rollie Hemsley 1907–1972 (Cubs 1931-1932)
Rollie was the backup catcher on the Cubs in 1931 and 1932, but he didn’t get along with manager Rogers Hornsby. Although Hornsby was a degenerate gambler, he was also a teetotaler that really cracked down on the team drinkers. Offenders included just about everyone on the team, particularly their best pitcher (Pat Malone), and their backup catcher, Rollie. Hemsley didn’t play often because he was Gabby Hartnett’s backup and Hartnett played every day, so Rollie often hung out in the illegal speakeasies with his teammates without fear of playing with a hangover. In the 1932 season, the team finally couldn’t take any more of Hornsby, and lobbied the young owner of the team (PK Wrigley) to fire him. They got their wish, and everybody’s best pal, first baseman Charlie Grimm was named the player-manager. Wrigley took a chance on Grimm — but not before he got Grimm’s word that he would make sure the players stayed out of trouble. The first meeting after he was named manager, the new manager told his team to please play it straight for a little while, ending his speech with; “Fellas, we got a darn good chance to win this thing. Everybody take good care of yourselves.” That same night, Rollie Hemsley had to be bailed out of jail after he went out and got drunk. Mr. Wrigley and Charlie Grimm were not amused. The Cubs traded Rollie to the Reds after the World Series that year (he batted three times in the 1932 series and struck out all three times). Hemsley went on to have a pretty darn good major league career with the Browns, Phillies, Indians, and Yankees, making the All-Star team five times. But Charlie Grimm never forgot that first night he was the manager of the Cubs, when a backup catcher almost ended his managing career the same day it began.

~Doug Jones 1957– (Cubs 1996)
Jones was the rarest type of closer imaginable — he threw junk. Jones never had a blazing fastball, but he somehow managed to save over 300 games in an 18-year big league career. The Cubs signed him as a free agent before the 1996 season, but something happened to Jones in a Cubs uniform. He had the worst ERA of his career and managed only two saves before the Cubs cut him loose. Of course, he was far from done. The very next year he saved over 30 games for Milwaukee.

~Bill Hanlon 1876–1905 (Cubs 1903)
Big Bill played one year in the big leagues. His role with the Cubs was backing up first baseman Frank Chance. He hit .095 in limited chances. He passed away just two years after his last big league game.

~Jack Katoll 1872–1955 (1888-1889 Orphans)
Known as “Big Jack” or “Katy”, Katoll was one of several Cubs (then known as Orphans) players to be born in Germany. He started four games for Chicago over two seasons, and threw three complete games. He later also pitched for the White Sox and Baltimore. After his playing career he settled in the Chicago area.

~Jake Stenzel 1867–1919 (Colts 1890)
Jake was an exile from the Players’ League when Cap Anson convinced him to play a few games for the Cubs (then known as the Colts). Even though Anson couldn’t convince Stenzel to stay in Chicago, it was obvious that he had a good eye for talent. Stenzel later played for Pittsburgh, Baltimore, St. Louis, and Cincinnati and finished his nine-year big league career with a .338 lifetime average. He opened a bar after his playing days, and sold it during World War I, just before Prohibition kicked in. 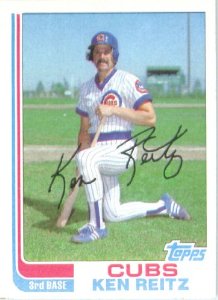 ~Ken Reitz 1951– (Cubs 1981)
Ken Reitz was an All-Star third baseman and Gold Glover for the St. Louis Cardinals when the Cubs acquired him along with Leon Durham for future Hall of Famer Bruce Sutter before the 1981 season. After arriving in Chicago, Reitz promptly forgot how to hit (.215). The Cubs released him after only one season, and he was out of the big leagues altogether just one year later. (Photo: 1982 Topps Baseball Card)