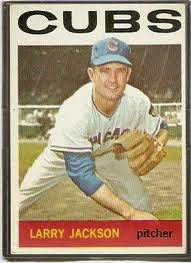 ~Larry Jackson 1931–1990 (Cubs 1963-1966)
Larry was already a 3-time All-Star when the Cubs acquired him from the Cardinals before the 1963 season (in the Don Cardwell trade), and he paid immediate dividends. In his first season with the Cubs he was an All-Star again, winning 14 games. But it’s his 1964 season that will be remembered. That year he put it all together and had one of the best years in Cubs history. Jackson led the league in wins with 24 (on a terrible, terrible Cubs team), and finished second in the Cy Young voting to Dean Chance, who won 20 games for the Angels. Jackson would have won the NL Cy Young Award, but at the time only one was given out in all of baseball. He tailed off a little during the 1965 season, but Larry Jackson may have done his greatest service to the Chicago Cubs in the early part of 1966. He was the player the Phillies acquired in the famous trade that brought Ferguson Jenkins to the Cubs. (Photo: Topps 1964 Baseball Card)

~Steve Rain 1975– (Cubs 1999-2000)
Rain pitched exclusively out of the bullpen for the Cubs in parts of two seasons — the entirety of his big league career. He won three games and posted an ERA of 5.46. He pitched in the minors for the Cubs and Brewers a few years after that but never made it back up to the show.

~Neifi Perez 1973– (Cubs 2005-2006)
Perez was a journeyman infielder when he arrived in Chicago, but for some reason he became Dusty Baker’s favorite player. Perez played a steady shortstop, but his on-base percentage was among the worst in the league. Despite having some promising rookies behind him (like Ronnie Cedeno), Perez got the bulk of the playing time. He was traded to the Tigers late in the 2006 season.

~Lee Gregory 1938– (Cubs 1964)
The Cubs acquired Gregory just before the 1964 season, and he got a cup of coffee in the big leagues that season. He pitched in eleven games, and registered a 3.50 ERA. He had a horrendous season in the minors the next year (1-9, 5.61 ERA), however, and the Cubs released him. Gregory never returned to the big leagues.