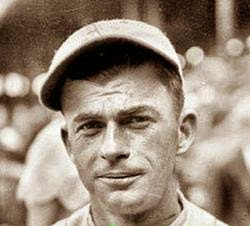 ~Carroll Yerkes 1903–1950 (Cubs 1932-1933)
The lefty pitcher (nicknamed “Lefty” of course) was a member of the 1929 A’s team that beat the Cubs in the World Series, but fell on hard times after that season, and didn’t reemerge until the 1932 Cubs pennant-winning season. He only appeared in two games for the Cubs that year, and in one more the following season. That was the end of his big league career.

~Pedro Strop 1985– (Cubs 2013-2019)
Strop was acquired along with Jake Arrieta in the trade that sent Scott Feldman and Steve Clevenger to the Orioles. The Dominican reliever was a key pitcher for the Cubs during their four-year postseason run.In 2015 he was the primary setup man to Hector Rondon and posted a sterling 2.91 ERA in 68 appearances, striking out 81 batters and saving three games. He had another pretty good season in 2016 (2.85 ERA), but he was hurt in September, and Maddon was hesitant to use him in his old role during the playoffs. He did pitch in every playoff series, and pitched well in three World Series appearances, but during crucial moments, his manager didn’t call Strop’s number. In 2017 Pedro was once again effective during the regular season (2.83 ERA), but this time Maddon did use him in the playoffs. He was one of the rare Cubs pitchers who performed well in the postseason. His 2018 season was probably his best in a Cubs uniform. Pedro became the closer after Morrow’s injury and saved 13 games with a 2.26 ERA. His late-season injury greatly contributed to the Cubs 2018 late-season collapse. Unfortunately for Pedro, he never really recovered from that injury. The wheels came off the Strop bus in 2019. He struggled through injuries to post a 4.97 ERA in 50 appearances and gave up more long balls than he had in any previous season.

~Jonathan Lucroy 1986– (Cubs 2019)
Lucroy had a very distinguished ten year big league career for five teams (Brewers, Rangers, Rockies, A’s, and Angels) before coming to Chicago. The timing seemed perfect. Lucroy was put on waivers by the Angels the same week Cubs catcher Willson Contreras got hurt. Jonathan proved to be an adequate defensive back up during the final two months of the 2019 season.