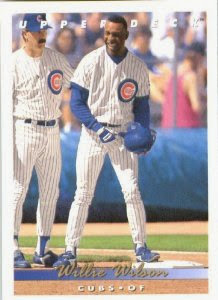 ~Willie Wilson 1955– (Cubs 1992)
Willie Wilson was one of the most dynamic players in baseball during the 1980s. Unfortunately, he wasn’t on the Cubs during those years. He was one of the all-time great leadoff hitters, a two-time All-Star and Silver Slugger, and a batting champion, but it was his speed that made him truly special. Wilson led the league in runs, hits, singles (four times), triples (five times), and stolen bases, and was the leadoff hitter for the 1985 World Series Champion Kansas City Royals. He still has the most inside-the-park home runs since 1950 (with 13). The Cubs brought him aboard as a free agent during one of their many, many transition years. They got rid of dead weight like Greg Maddux and Rick Sutcliffe and brought aboard people like Jose Guzman (bust), Candy Maldonado (BUST!!!), and Willie Wilson. How did Willie do with the Cubs? Well, let’s put it this way. In his career he stole 668 bases, but only eight of those came with the Cubs. He was 38 years old when he joined the team and his speed — which had always been his greatest asset — was gone. (Photo: Topps 1993 Baseball Card)

~Buck Herzog 1885–1953 (Cubs 1919-1920)
Herzog had a very good 13-year big league career with the Giants (four pennant winners), Braves, Reds, and Cubs, but in Chicago he will always be remembered for the way his career ended. Team president Bill Veeck got a telegram before a game in August of 1920, saying that there had been an unusual amount of betting against the Cubs. The starting pitcher that day, Claude Hendrix, reportedly bet $5000 himself. Veeck reported the incident to Judge Kennesaw Landis. In Judge Landis’ autobiography, he admitted that he quietly banned Hendrix for life. No public announcements were made. The other implicated Cubs player was Buck Herzog. Buck was also quietly shoved out of baseball by Landis. After the season he was attacked by a fan who called him a crook. During the melee, a friend of the fan stabbed Herzog three times (he recovered from his injuries).

~Guy Hoffman 1956– (Cubs 1986)
Guy was a left-handed swing starter for the Cubs in 1986 and posted respectable, if unspectacular numbers. He was 6-2, with a 3.86 ERA. The Cubs traded him to the Reds the following year and Hoffman had his best season in the big leagues. He won 9 games in 22 starts for the 1987 Reds. That was his last good year. By 1988 he was out of the big leagues. He signed in Japan, and finished his career there.

~Gene Fodge 1931–2010 (Cubs 1958)
Fodge had one of the great nicknames in the league. His teammates called him Suds. Suds was with the Cubs for the first four months of the 1958 season, serving as a swing starter and reliever. After the South Bend native was sent back down to the minors in July, the 27-year-old right-hander decided the time was right to call it a career. He resided in Mishawaka, Indiana until his death in 2010.

~Turner Barber 1893–1968 (Cubs 1917-1922)
Barber played six seasons in Chicago during the first few years in the new ballpark now known as Wrigley Field. He was a backup outfielder and first baseman for most of that time (including the pennant-winning season of 1918), but he did finally claim a starting outfield spot during the 1921 season. Unfortunately for Turner, he didn’t really have the power necessary to keep a corner outfield job. He hit only one homer. The Cubs decided his .314 average wasn’t enough to let him keep the spot. Barber played in the minor leagues until 1930.

~Dave Shean 1883–1963 (Cubs 1911)
The Cubs acquired Shean from Boston to fill in for Johnny Evers, who suffered a nervous breakdown during the 1911 season. Dave was known as a solid second base glove, and he shared the position with well-known defensive butcher Heinie Zimmerman. Zimmerman was a great hitter, however, so he got the bulk of the playing time. 1911 was Shean’s only season in Chicago. The following year he went back to Boston.

~Jimmy Cooney 1865–1903 (Colts 1890-1892)
One of two Jimmy Cooney’s to play for Chicago. This Jimmy Cooney is not the one that recorded an unassisted triple play in the 1920s. This Jimmy Cooney was his dad. He was also a shortstop, but he played in the 1890s. In his rookie season of 1890 he led the league in plate appearances and fielding percentage. His success dwindled every year after that. By the time he left Chicago in 1892, he was hitting only .171.

~Miguel Montero 1983– (Cubs 2015-2017)
The Cubs signed the two-time All-Star catcher (with Arizona) as a free agent before the 2015 season. They brought the Venezuelan in because of his toughness, his renowned ability to frame pitches, and his left-handed bat. He served as the Cubs primary catcher and contributed 15 homers. His handling of the staff was excellent, but he also had trouble blocking low pitches in the playoffs, which led to a few crucial runs scoring against the Cubs in the NLCS in 2015. 2016 was a much rougher season for Miguel. He hit only .216 and lost his starting job to rookie Willson Contreras. On the other hand, Montero also clubbed one of the most dramatic homers in Cubs history — a grand slam in Game 1 of the NLCS. In 2017 Montero bristled at his diminishing role. When he blamed his lack of success at throwing out runners on Jake Arietta’s slow delivery, the Cubs let him go. He finished the season with Toronto.