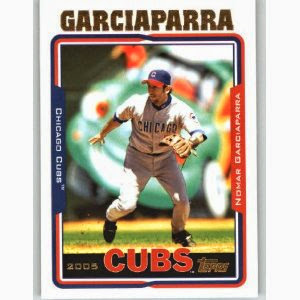 ~Nomar Garciaparra 1973– (Cubs 2004-2005)
The Red Sox shocked the world when they traded their five-time All-Star and two-time batting champion to the Cubs as part of a four-team trade in 2004. It seemed like the Cubs made a great trade. They gave up their shortstop that had made a critical error the year before (Alex Gonzalez) and a few other minor prospects, for one of the best hitters in the American League. Red Sox nation was very upset by the trade (made by Theo Epstein, by the way), and Chicago gave Nomar a standing ovation his first time up to bat. His wife (Mia Hamm) became a regular at Wrigley Field that summer. So what happened? The Red Sox won the World Series. And the Cubs? They blew a big lead in the closing week of the season to miss the playoffs completely. The following season Nomar suffered a horrible injury (tearing his groin) and missed most of the year. Despite a very warm welcome and a fan base that was rooting for him, it never worked out for Nomar in Chicago. In 2006, he signed as a free agent with the Dodgers, where he had his final All-Star season. (Photo: Topps 2005 Baseball Card)

~Chuck Crim 1961– (Cubs 1994)
Crim was a right-handed reliever who pitched for the Cubs during the strike-shortened 1994 season. He picked up two saves that year — his final season in the big leagues. He previously had pitched for the Brewers and the Angels.

~Ival Goodman 1908–1984 (Cubs 1943-1944)
He was known as “Goodie” or “Ol’ Mate” and was a two-time All-Star who hit 30 homers one season for the Reds. He also led them to a 1940 World Series title. By the time he was roaming the Wrigley Field outfield during the war, Goodie was no longer that goodie. He was strictly a fourth outfielder for the Cubs. His power was completely gone. In two full seasons, he hit four homers.

~Joe Mather 1982– (Cubs 2012)
The former Cardinals utility man became a Cubs utility man in 2012. He played a little outfield, third base, first base, and even pitched once. Unfortunately, he also only hit .209. The Cubs allowed him to leave via free agency, and he never made it back up to the big leagues.

~Ginger Beaumont 1876–1956 (Cubs 1910)
Beaumont was a great hitter. The center fielder’s lifetime average was .311, and that included a batting title with the 1902 Pirates. His last season in the big leagues was as a member of the pennant-winning 1910 Cubs. The 33-year-old hit .267 in 76 games for the team that year and batted three times in the 1910 World Series. He walked once and scored a run in that series. After it was over, so was his big league career.