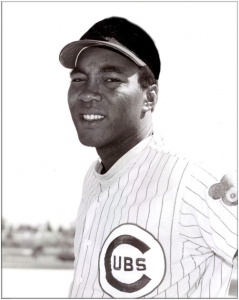 ~Jophery Brown 1945 (Cubs 1968)
The story of Jophery Brown’s Cubs career is a short one. He pitched exactly two innings of one game on a Saturday afternoon, September 21, 1968, at Forbes Field in Pittsburgh. Joe Niekro started that game for the Cubs against the Pirates, but he simply didn’t have it. He gave up four runs in the fourth inning, so Cubs manager Leo Durocher sent Brown out to start the 5th inning. The first batter he faced was Maury Wills. Wills singled to center. Freddie Patek batted second, and he sacrificed Wills to second base. Brown must not have felt too comfortable on the mound with Matty Alou, Roberto Clemente, and Don Clendenon due up next, but he buckled down, and got Alou to fly harmlessly to left field. That brought up future Hall of Famer Roberto Clemente. There was no question what had to be done in this situation. Cubs catcher Randy Hundley held up four fingers, and Brown intentionally walked the fierce Pittsburgh slugger to face Don Clendenon. If you mention the name Clendenon to Brown today, it would probably still elicit a groan from him, because Clendenon singled to left, driving in Maury Wills. That run turned out to be the only one given up by Jophery Brown in his big league career.

Brown pitched one more year in the minors after that, developed arm trouble, and retired from the game at the ripe old age of 24. But Jophery Brown certainly didn’t go quietly. Even during his minor league career he had dabbled in Hollywood, working as a stuntman for the television series “I Spy” (starring Bill Cosby). When his baseball career was officially over, he returned to Hollywood and was soon working steadily. Among his 117 feature films and television shows, Jophery Brown has done stunts for “Live and Let Die,” “Papillon,” “Smokey and the Bandit,” “Convoy,” “Foul Play,” “The Blues Brothers,” “Vacation,” “Scarface,” “To Live and Die in LA,” “Die Hard,” “Speed,” “Get Shorty” and all three “Lethal Weapon” movies.

The many famous people on Jophery Brown’s “Brushes with Greatness” list are truly astounding, but if you asked him which celebrity impressed him the most, would it be one of those Hollywood legends with stars on the Walk of Fame, or would it be one of his teammates with plaques in Baseball’s Hall of Fame? Hall of Famer Billy Williams played left field behind him and threw the ball back to the infield after Clendenon’s RBI hit. Ron Santo was at third base. Fergie Jenkins was a fellow member of Brown’s pitching staff. Mr. Cub himself, Ernie Banks, was the heart and soul of that 1968 team. Even the manager of the Cubs, Leo Durocher, was a future Hall of Famer. That’s not to say that Brown’s Hollywood career hasn’t been remarkable, because it surely has. But how many players in MLB history managed to play only two innings in the big leagues, and can still say they played for a Hall of Famer, played with four Hall of Famers, and pitched to another Hall of Famer? I’m betting Jophery Brown has told that story to his Hollywood friends more than a few times, and even they were impressed.

~Jack Latrell 1929 (Cubs 1957)
Future Cub shortstop Jack Littrell got a few cups of coffee with the Athletics before coming to the Cubs in 1957. Even though he was backing up the league’s MVP that season (Ernie Banks), Jack got the most extensive playing time of his career in 1957. He also got a little time at second base and third, and did a very respectable job with his glove, but Jack never quite got the hang of big league pitching. His lifetime batting average was .204. 1957 turned out to be his last year in the big leagues. After he retired he became a railroad brakeman on the L&N/CSX Railroad.

~Brian Dayett 1957 (Cubs 1985-87)
On this day in 1957, future Cub Brian Dayett was born. The Cubs got him from the Yankees (for Henry Cotto) the December after their famous 1984 playoff collapse. He got tastes of big league action in September of 1985 and 1986, but got his big chance in 1987. That year he shared the left field job with Rafael Palmeiro. Palmeiro eventually beat him out, so after the season Dayett took his talents to Japan. He never played in the majors again.