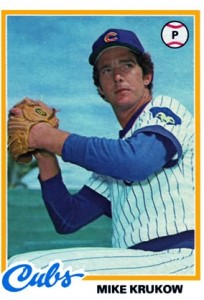 ~Mike Krukow 1952 (Cubs 1976-1981)
Mike Krukow shares a nickname with singer Bobby Vinton (The Polish Prince), but Mike Krukow was not known for botching the National Anthem. He was known for his stellar career as a starting pitcher for the Cubs, the Phillies and the Giants. He never quite managed to harness his wild streak while he was a Cub, so they traded him to the Phillies as part of the deal that brought Keith Moreland to the Cubs. Krukow didn’t really flourish until joining the Giants. He put it all together in the 1986 season, winning 20 games. He also pitched in the NLCS for the Giants the following year, beating the St. Louis Cardinals in his only start. After retirement The Polish Prince became a broadcaster for the San Francisco Giants, and he remains in that job today. (Photo: 1978 Topps Baseball Card)

~Lew Fonseca 1899 (Cubs announcer, 1930s)
In 12 big league seasons he played first base, second base and left field for the Reds, Phillies, Indians, and White Sox. As a manager, he led the White Sox to one of their worst seasons of all time in 1932. They finished that year 49-102. After his playing/managing career ended, he settled in Chicago and became one of the early radio announcers for the Chicago Cubs. Lew Fonseca is buried in the same cemetery (All Saints in Des Plaines) as another famous Cubs announcer, Harry Caray.

~Dave Smith 1955 (Cubs 1991-1992)
He was a great relief pitcher for the Houston Astros for ten years. He was a two-time all-star, and is second on the all-time Astros team save list. He came to the Cubs at the end of his career, and quickly developed arm problems. He struggled through two seasons for the Cubs 1991-1992, before retiring. When Smith died unexpectedly in 2008 at the age of 53, it hit his ex-teammates hard. “He was probably one of the most giving people I ever met,” former Astros reliever Charlie Kerfeld told the Houston Chronicle. “He was probably known around the league as the best tipper around the league. (The news of his death) is a tough one. You ain’t supposed to go this early.”

~Alan Benes 1972 (Cubs 2002-03)
His brother Andy was already a star MLB pitcher when Alan came to the big leagues. Alan had a few good years with the Cardinals before hurting his arm. He was never quite the same after that, including his two seasons with the Cubs.