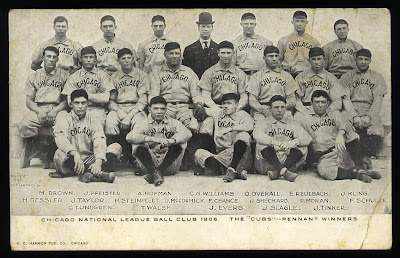 ~Tom Walsh 1885–1963 (Cubs 1906)
Walsh was a member of the winningest team in MLB history, the 1906 Cubs, but just barely. (He did make it into the team picture, though. That’s him, second from left, in the front row.) Tom was a catcher, and got into exactly two games (one in August, and one in September). He was also given only one opportunity to hit. (He struck out.) Despite being only 21 years old, Walsh never played another game in the big leagues. According to Baseball Reference, he never played a game in the minor leagues either.

~Dolan Nichols 1930–1989 (Cubs 1958)
Nick, as he was called by his teammates, was a reliever for the 1958 Cubs. In 24 appearances, he earned one save. The Cubs sent him back down to the minors by mid-season, and although he got another shot in September after the rosters were expanded, that was the exent of his big league career. Nichols pitched in the minors for a few more years before retiring at the age of 30.

~Aroldis Chapman 1988– (Cubs 2016)
Chapman was acquired mid-season by the Cubs, and it cost them a pretty penny to acquire him. Four top prospects, including the Cubs top prospect (shortstop Gleyber Torres) went to the Yankees in the deal. Chapman became the final piece to the World Series puzzle. He was dominant as the Cubs closer, saving 16 games with a 1.01 ERA in the regular season, before saving four more in the playoffs–including one in the World Series. Though he left the Cubs after the season as a free agent, he will always be remembered for his performances down the stretch (including, unfortunately for him, the homer he gave up in the bottom of the 8th in Game 7). He is the only pitcher in Cubs history to regularly throw the ball over 100 miles an hour.